Not a Kidd anymore

Football on a Sunday afternoon still doesn't feel right; then again having the FA Cup sponsored by a German energy service provider doesn't sit right with me either. But in the same way I felt obliged to make the short journey from my house to Meadow Lane every other Saturday when I lived in Nottingham, I now feel equally compelled to turn on the TV every time Notts County have the cameras trained on them. Yesterday's 4th Round replay against Man City was, depending on which paper you read, David v Goliath or the paupers up against the millionaires. I won't bore you with the match details (Adrian Chiles and his ITV cohorts did plenty of that with their humourless quips and lazy research), suffice it to say that if you'd had a tenner on Man City thumping us 5-0 the drinks would have been on you last night.

But as good as the game was (and it was, the scoreline really did flatter the foreigners) the reason for this post is not to bitch about the result. Nor is it to wonder what possesses grown men to wear snoods: I'll leave that to people who are far more qualified than me. No, this little offering concerns Manchester City's No.2 - when the third goal went in and the Notts faithful were praying for a miracle, my thoughts turned to Brian Kidd. 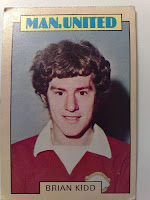 Any seasoned campaigner will know Brian Kidd's track record. He was a hero at Old Trafford between 1963 and 1974 (including winning the European Cup on his 19th birthday) and then went on to further playing success at Arsenal, Manchester City and Everton before playing exhibition soccer in the States with Fort Lauderdale Strikers in the 80s. His return to Blighty has seen him coach and manage numerous clubs, most memorably his stint as the switch on Alex Ferguson's hairdryer (1991-1997).

illustrious past, however, is not the reason I was thinking

about Mr Kidd. Watching him on the bench (which at Eastlands means individual Parker Knoll recliners) I could only think that he must have a picture of Dorian Gray in his attic: the man never seems to get any older. Time, and the ageing process, seems to have stood still for Brian Kidd. Maybe he uses the same moisturiser as Cliff Richard. Maybe he goes into stasis every night. Or maybe he has sold his soul to The Devil.