There's something about neon lighting. Whether it be a sleazy motel sign off Route 66 (see Andrew Wood's film below) or the full in your face overkill they call Vegas - it can't fail to catch the eye. For me it practically says put down what you're doing and look at me. Over the years I've seen plenty of examples in this country too. Here's just a couple: the first one I used to see regularly when working in London many years ago - it was just off The North Circular and at night would glow like some sort of garish lighthouse. I never went to the track itself but, on a couple of occasions, found myself driving into the car-park just to stare at the neon. Of course, like so much of London, it's not there anymore. 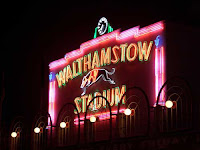 And this one always felt reassuring. Pulling in to Loughborough station on winter evenings, with St. Pancras a safe distance behind me, this sign meant I was nearly home. Often, waiting for passengers to get on the train and the signal to turn green, I'd get a note pad out of my bag and try to capture it with an HB pencil.