I never tire of looking at photographs of The Beatles, especially when I stumble across ones I've never seen (or can't remember seeing) before. Earlier today I found this little gem. 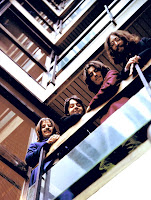 To the untrained eye you'd say it was lifted from the 1967-1970 Blue Album. But look again. It's obviously taken at Manchester Square in Marylebone (EMI's London offices), however, it's been taken from a diiferent angle and on a different day. I know it's a boy thing; if I was to show the picture to my GLW and say 'can't you see George is wearing a different jacket?' I'd get 'the look' and probably an audible sigh which, over the years, I've translated into English: it means 'grow up.'
Which is probably why I won't be showing her this photograph either. 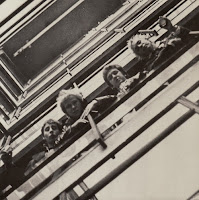 Before they demolished EMI (the building*, not the label) another four piece combo had their mugshots taken from the bottom of the stairwell.