Plaque of all trades

Hull had been the driving force behind influential Tyneside folk rockers Lindisfarne. He wrote many classic songs for the band, including We Can Swing Together, Lady Eleanor and Fog On The Tyne as well as persuing a successful solo career.

There's now a head of steam building for the top brass in the North East to commemorate his life with a blue plaque. You'd think it was the least they could do - to honour one of their own. If you can take five minutes out of your day and lend your support, that would be admirable. 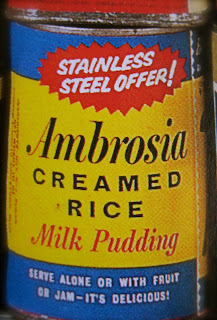 Growing up in a small town it was compulsory to make your own entertainment; walking over zebra crossings pretending to be blind, teaching the parrot in the hardware shop to swear and seeing how far you could get on the bus without paying was all in a day's work before we went home to lust over Jenny Hanley on Magpie.

Then one day while we were throwing power balls at parked cars, The Prof said: 'Why don't we follow someone?' The word stalking hadn't yet entered the lexicon so we thought 'Why not?' We postponed our day on the railway line (flattening pennies could wait) and looked forward to a spot of covert surveillance. 'Who shall we trail?' asked Baz a little too keenly, I thought. The Prof deliberated whilst chewing the end of his Curly Wurly. 'That nutter who's always being chucked out of Woolies' he said. Before I could ask which one, nutters and Woolies would have made a rather large Venn Diagram, The Prof announced: 'Today we shall be following The Rice Pudding Man.'

The Rice Pudding Man. Just the mention of his name now is enough to bring me out in goosebumps. And before you ask, his moniker derived from the fact that he was always, and I mean always, carrying a see through plastic bag which only ever contained one item - a tin of Ambrosia's finest.

It was late morning and we were hiding behind a phone box on the Boots side of the high street. The other side, where F W Woolworth resided, was always known as, you've guessed it, the Woolies side. Just after midday we heard a commotion on the Woolies side: two burly store detectives were escorting a rather large and disheveled character off the premises. The RPM. The Prof looked at his watch and said to me and Baz 'The eagle has landed. Synchronise watches, it's 12.07pm. Commence Operation Search and Destroy.' Clearly he'd been watching too much Mission Impossible. And or Kojak. I looked at my battered Timex with its face all smashed in and Baz at the ink drawing of a watch he'd scribed on his arm; clearly this operation would not be sponsored by Accurist.

We walked miles that afternoon. Bloody miles. And what did we see, what did we discover? We saw a man who had an unhealthy interest in public litter bins, animal droppings and shouting at passing cars; par for the course if you're a vagrant/tramp.

So with the time fast approaching half past four we decided that we'd seen all we needed to see (bugger all) and that our foray into the world of private investigating would not be something we'd bother repeating. But then, just as we were about to traipse home, the RPM stopped dead in his tracks and looked over his shoulder. 'Oh God', I thought, we've been rumbled; well we had been following the bloke for the thick end of four hours. But he never clocked us. He looked all around - we were on the edge of the local arboretum - and then looked up at the sky.

What he did next was to reach into his inside pocket and pull out something sharp and shiny.
It was a Winfield gardening trowel. He then got down onto his haunches and started digging a hole. What was he doing? Burying something or retrieving something? We couldn't take our eyes off the scene unfolding before us. After twenty minutes the hole was about a foot square and it looked nearly eighteen inches deep. The RPM then tipped out the solitary tin of rice pudding from the carrier bag and proceeded to drop it into the hole.
Five minutes later he'd back-filled the hole, marked it with an old lolly stick and then, after looking up at the sky once more, ran away. At speed.

Ahead of his time 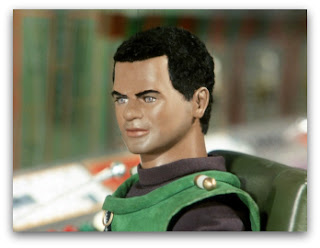 The severely underrated Barry Gray and his deft scores complimented Gerry Anderson's world of Supermarionation perfectly. This piece is no exception; I'd be very surprised if funkmeisters such as Craig Charles, those fine people at Blow Up or Mondo haven't played this to death at sometime or other.

Going for a slash 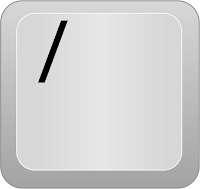 I love Radio 4. Always have done. Yes, I know it still carries the elitist tag and accusations of the station aiming at a certain demographic abound. However, I would argue that the programme makers and station managers have, pretty much, got the balance about right. But my point, if you can call it a point, has nothing to do with programme content or indeed anything to do with the BBC's mission statement. I'm here to take issue with something called the forward stroke.

As in: 'The details are on our website - www.bbc.co.uk forward stroke youandyours

In a world where the internet and emails have dislodged the self stamped addressed envelope and is used by everyone from the age of 4-104, this stubbornness against using the recognised slash is really beginning to grate. It's like referring to the capital as Londinium or still calling Zimbabwe, Rhodesia. 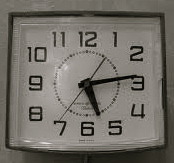 Have you got 4 together? 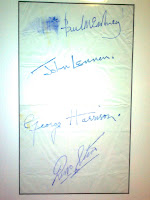 If George Harrison was feeling mischievous when asked for his autograph he'd often sign not just his own moniker, but those of John, Paul and Ringo too.

I wonder if he did mine?
Posted by John Medd on Wednesday, January 04, 2012 3 comments:
Labels: Beatles autographs, The Beatles

The number of the counting shall be 3 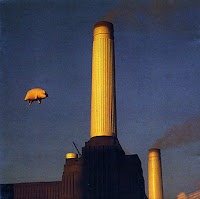 When the late Stephane Grappelli recently turned up in EMI's vaults lurking on Pink Floyd's Wish You Were Here, it was likened to finding The Holy Grail. Grappelli had been working in Abbey Road Studios at the same time as the Floyd and was asked to come in and play with the band. Upon the album's release they said he'd been lost in the mix; more likely Gilmour and Waters had a fight about whose idea it had been and then dropped the veteran jazzer's deft solo altogether. Shame it's taken over 35 years to resurface.

In 1972 The Sweet came of age. Bubblegum was visible only through the rear view mirror and Glam was fast approaching. They fulfilled over 120 dates that year, not only in this country but many in mainland Europe; Germany, Holland and Sweden would prove to be very lucrative markets for Messrs. Connolly, Priest, Scott and Tucker.

So with a set list that still included Poppa Joe, Co-Co and Little Willy, the RCA recording stars were still trying to find a running order that combined the lightweight pop they were known for and the heavier stuff you'd find if you flipped any of their singles over. (Wig Wam Bam wouldn't be released 'til September). The perfect vehicle to bridge the two distinct elements of their set was a Who medley - My Generation would eventually turn up on Desolation Boulevard - giving Andy Scott the chance to emulate his guitar hero, Pete Townshend. In fact, were it not for Brian Connolly's antics a couple of years later, The Sweet would have supported The Who at Charlton in '74. But that's another story.

It started at midnight; the first of the first. 2012 was a blank canvas. Only it's not anymore. It's just a snapshot in time. Already people have died, many more have been born and world events are skipping along at quite a pace. One may be the loneliest number. But not for long.