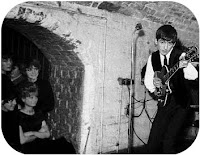 For reasons too long to go into here, we only did one day of the Matthew Festival this year. The temperature in The Cavern must have been pushing 40 degrees as acts from all over the world took to the tiny stage and gave us their version of Merseybeat. Unlike most tribute bands, nobody pretends they look the part (though a George Harrison lookalike was stood behind me at one point); it's just musicians paying homage to their favourite Beatles tunes - and not exclusively culled from the Red and Blue albums, either - Two Of Us and I'm A Loser by a bunch of Brazilians (The Yesterdays?) certainly hit the spot for me. In spite of everything, father and Number One son renewed their vows, not that they were in danger of expiring, and both promise to be back next year.

He won't thank me for it, but this is for James.

We had time for a team photo before we came away - taken outside The Cavern. Just like we did last year
Posted by John Medd on Monday, August 30, 2010 2 comments:
Labels: fathers and sons

Got a very interesting email from the BBC yesterday. An idea I had for a radio programme has garnered some interest. I can't say too much at this stage; loose lips and all that. I suppose if I was twenty years younger I'd sign off with one of those smiley emoticons. Oh, bugger it - I could get knocked down by a bus tomorrow :)

Wade In The Water

Something for the weekend? Christine Collister singing a cappella in St Paul's Cathedral. If you know of a venue with better acoustics, I'll show my arse in Burton's window.

Got Live If You Want It 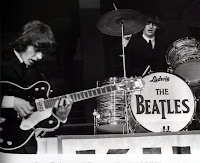 Anyone who knows me will tell you that I don't need an excuse to play The Beatles or, indeed, anything Beatles related. And today is no different. It's neither a high day or holiday but, if I was looking for a motive, I could argue that it's all part of my warm up for the Matthew Street Festival up in Liverpool next week. We went last year and in 48 hours took in more Beatles tribute bands (mostly in The Cavern) than most people would see in a lifetime. But that can't be healthy, I hear you say. And you'd probably be right. Anyway, take a peep at this: some classic archive footage of The Fab 4 in Tokyo, 1966. If you're only used to seeing grainy black and white footage of the Hey Jude hitmakers playing live, then this is for you. 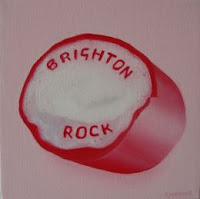 Just a quick one today. My friend, Chris Higgins, musician and Brighton dweller, recently sent me his latest batch of recordings. He goes under the moniker The Ruminators and he/they have just bashed out thirteen shiny new pop gems. You'll find my favourite track at the bottom of the page.

When I get a minute I'll get 'round to penning a few words on not only Chris' songs but also two classic Brighton novels (without mentioning that one): West Pier by Patrick Hamilton and Keith Waterhouse's Palace Pier both depict the town in true warts and all style and I revisit them often. Anyway, as Kirsty Wark might say, more on those stories later.

That's 2 Ls on the Phill

Just finished reading Phill Jupitus' Good Morning Nantwich (Adventures in Breakfast Radio) - the big man's intoxicating account of his 5 year tenure at BBC 6 Music. And a delightful read it is too. His love of radio, like a lot of us, goes back to the crackly pirates, swinging Radio 1, Terry Wogan and, no surprises here, John Peel. If Peel had ever dipped his toe into the torrent that is Breakfast Radio it wouldn't have sounded too dissimilar to Jupitus' morning output circa 2002-2007.
Interspersed with his recollections of the time (mostly good, if you discount his frequent run-ins with BBC top brass) he drops in a few playlists (mostly excellent) and even offers tips for anyone thinking of starting up their own DIY radio station.

Phill was kind enough to mention his memories of broadcasting his show from Medd Towers in July 2005:

''Next time out we were in Nottingham and in the company of the Medd family. Jenny and John with their tall son James who was fifteen and in a band and by now must be fending off the ladies with a shitty stick. They had cats, and we set up in their living room. Jenny made bacon sandwiches which really hit the spot.''

Cheers Phill, this one's for you: 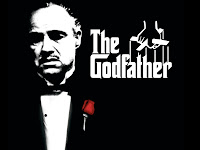 Driving home tonight and the motorway was full of the usual suspects: Volvo drivers hogging the middle lane, Eddie Stobart wagons trying to overtake rival fleet and Johnny Rep in the outside lane convinced he's going 'round the Nurburgring. Then, just as I was approaching my exit I spotted white van man sporting a familiar logo: 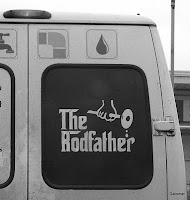 Cracking name for a drainage company, don't you think? So for the remainder of my journey I idly thought about other variations on a theme - you can see where this is going can't you? And, they're all for real. 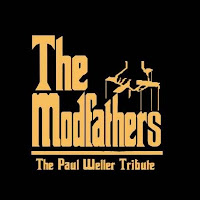 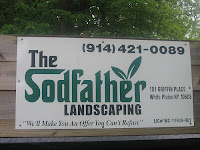 Now, if I could only find that maverick bricklayer...
Posted by John Medd on Tuesday, August 10, 2010 8 comments:
Labels: Flattery

We walked into town last Thursday. It was a beautiful evening so we took the scenic route along the towpath. I say scenic; walking down the steps from London Road leading to the canal, the first thing we saw was a plethora of discarded Tennents tins and an empty milk carton. Anyhoo, you'd think that would be the perfect excuse to shoehorn some Doctor Feelgood into the mix wouldn't you? Maybe, but what with Oil City Confidential and everyone looking for the source of the Thames Delta, I thought I'd go off on a slight tangent.

Wilko Johnson is on record saying that Mick Green of The Pirates was the reason he picked up a guitar. To the point that Wilko would play their singles at 33 rpm just to 'work out what was going on in there.' Sadly, Mick passed away earlier this year. Here's a taster of just how good he was. It's also testament to the fact that, when it comes to playing the guitar, less is more. 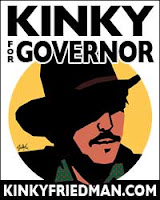 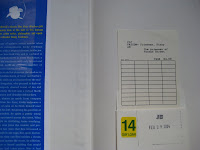 is more of a buy one get one free, really. Sorting out a few books last night, I was thumbing through my Kinky Friedman (novelist, Bob Dylan sidekick, Texas Jewboy, politician, maverick) section when I came across a couple of of the Kinkster's tomes in my modest collection. My copy of Prisoner of Vandam Street was, quite plainly, stolen from Palm Beach Library. It was taken out (for the first and last time) in February 2004 and never returned. The Amazon marketplace seller from Florida (I'd best not mention his name here) then shipped it 5,000 miles across the pond. And my copy of Meanwhile, Back At The Ranch is signed by the man himself - we went to see him at The Maze in Nottingham (one of his rare UK appearances) playing a few live favourites, with some selected readings thrown in for good measure. Afterwards, while chewing on his trademark cigar (pre-smoking ban), he signed my humble paperback: 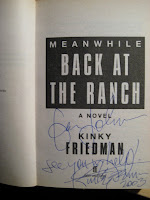 As you can probably understand, it's something that I, a, treasure and b, hope never comes to pass.

Whilst putting the books away I then thought that, if I'd approached Kinky now, it would be almost expected of me to produce a camera and capture the moment digitally and forever. Luckily this was nearly ten years ago and gigs were generally camera free zones. But that's not to say I haven't got a few snaps of me rubbing shoulders with the (sometimes) great and (mostly) good. I'm not starstruck by any means (it's not always cool to take the Instamatic out after interviewing somebody or even just meeting them for a chat after a gig), but every now and then I've not been able to help myself: those moments when I've thrust the camera at Mrs M and asked her to point and shoot invariably make a good night, quite literally, unforgettable. Just ask Rodney Bewes or Wreckless Eric!
Kinky Friedman - Ride 'em Jewboy (1973)