Neil Young was one of the last turns I went to see before we left Nottingham in 2010. I think I covered it for the paper, but I can't remember now. It would've been around the time he released his 30th. studio album Le Noise. As with a lot of latter day Young, it pretty much flew under the radar - if the critics can't see a Southern Man on there or a Hey Hey, My My they tend to dismiss it. Their loss.

One day I would love to gather my thoughts on Neil Young and try and put into words what I think  makes him a true one of a kind; a maverick. But first I need to finish his autobiography which, along with about another dozen or so paperbacks, is currently weighing down my bedside table.

In the meantime, and because I heard it on RTÉ tonight while I was in the bath, here's a beautiful song from that album which harks back to a more stripped back, acoustic Neil Young and one that certainly pushes all my buttons.

FYI this is post No. 1,000 to appear on my blog. Are We There Yet? (formerly Even Monkeys Fall Out Of Trees) became a thing on February 15th. 2010. And yes, I know there's a picture of Manchester City's Neil Young at the top of the page. 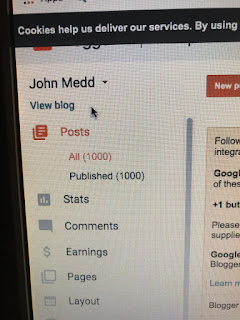