The name's Harrison, not Lennon 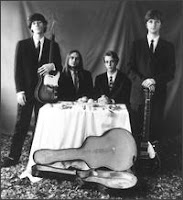 Anyone who's been on the receiving end of one of my CD compilations will know
Posted by John Medd on Tuesday, February 15, 2011
Labels: Christopher Eccleston, Cotton Mather, Future Clouds And Radar, John Lennon, Robert Harrison, The Beatles