The best thing about the future is that it comes one day at a time*. We all have glimpses into the future. But, thankfully, glimpses are all they ever can be. I look out into the front garden and see the For Sale board that went up last week - my crystal ball is a bit foggy at the moment, but I can, vaguely, make out a brand new start. And, following James' lead (and thanks to my Irish heritage) it will still be as an EU citizen; a dual passport will be so much easier going forward into this post-Brexit apocalypse. As for what happens after that, it will, as Lincoln said, unfold day by day. Because, let's face it, who would *want* to know beyond that? Not me, that's for sure.
* Abraham Lincoln (the quote meister)

It's all gone Pete Tong

I think he could be in the kebab shop.

What do I know?


Oscar Wilde once said - 'With age comes wisdom, but sometimes age comes alone.' I know what he meant: the older I get, the less I know. Fact.
If you were to ask me what I know I'd probably reply - 'The square root of fuck all.' And you can quote me on that.
Posted by John Medd on Saturday, June 25, 2016 No comments:
Labels: Oscar Wilde 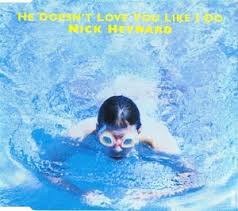 With so many of his peers hitching their caravans to the lucrative eighties package tour circuit, it’s refreshing that Nick Heyward is still doing intimate acoustic evenings in arts centres and pubs (like this) - playing stripped down versions of his solo records, as well as all the Haircut hits. Not long after he parted company with Haircut 100 I quite literally bumped into Heyward as I was coming out of The Ship in Wardour Street and he was walking in – a proper popstar sighting. Since then I've seen him live a couple of times - plugging his From Monday to Sunday album on tour with Squeeze and then a couple of years later in a tiny venue in Leicester promoting 1995’s Tangled. Fine albums both. Although Kite is one of my favourite singles of all time, I’ve gone for the infectious sixties influenced He Doesn’t Love You Like I Do. If I was Tony Blackburn I’d probably dedicate this poptastic piece of pop fluff to anyone who has recently had their girlfriend stolen.

Nick Heyward - He Doesn't Love You Like I Do 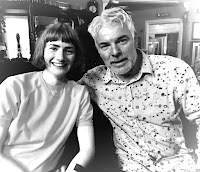 I was privileged yesterday to spend some time in the company of Janneke Earl, editor of Angle Grinder - Manchester's premier literary magazine. Janni has a passion for the arts, design, and culture. She is also equally as passionate, I found out during the course of the afternoon, about beer. And gin. And drumming.

Suffice it to say, we got on famously.
Posted by John Medd on Monday, June 20, 2016 No comments:
Labels: Angle Grinder, Janneke Earl, Manchester 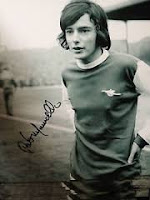 When Graham Lester George showed me the photograph (above) that he'd taken in London in the early 1970s, I was transported back to a world when, for just a handful of years, football was about the only thing I thought about: playing it, watching it on our new Radio Rentals colour telly, collecting and swapping bubblegum cards, plastering my bedroom walls with pictures of George Best. And dreaming that one day I'd emerge from the tunnel at Wembley, ball under my arm, leading out the national side. Alas, those dreams turned to nought - I didn't even make the trials for Hull City.

The image captures a bunch of street urchins who, quite clearly, have sworn their allegiance to Arsenal. The lad with the mop of long hair looking at the camera probably thinks he's Charlie George. Or Peter Marinello. Marinello was a Scottish George Best: George Best lite. He couldn't pull the same class of birds as Bestie and certainly couldn't find the back of the net as often as his Norther Irish counterpart. But he had a bloody good go at it. He certainly could put away the drink like Best. However, his troubles didn't stop with the booze. Marinello's story, complete with gangsters and shooters, plays out more like The Sweeney than Match of the Day and, as a result of seeing Graham's excellent photograph, I picked up Marinello's warts and all autobiography, 'Fallen Idle', from Amazon. I've just read the dust jacket - 'I squandered my talent. I pissed most of it up against the wall. I'm the guy who wrote the manual of How Not To Do It.' That's tomorrow's train journey to Manchester sorted then. 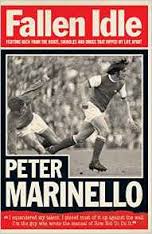 It's sad to see what's become of the Robin Hood Hotel in Newark. I used to could have a drink in there at lunchtime; many moons ago when I was holed up in the building opposite, and when the concept of a pie and a pint in the middle of the working day was considered the norm - encouraged even. Oh God, I hope that doesn't make me sound like Nigel F***ge.


I fell in love with Helen Zaltzman's podcast, The Allusionist, within five minutes of first hearing it. Anyone who gets off on words and cares about the English language will, like me, lap it up and count down the days till she records the next episode. I recently stalked emailed Helen and asked her nicely if she'd mind doing a quick Q&A for my blog. And, bless her, she acquiesced.

You’re a logophile. Give us three words that best describe you.

How did The Allusionist start, and who are Radiotopia when they’re at home?

When they're at home, Radiotopians are usually hiding in a wardrobe or under a duvet, trying to emulate studio recording without having to leave their property. While they're doing that, and also the rest of the time, Radiotopians manage to be the most creative, thought-provoking, curious people working in audiotainment. I love that bunch of duvet-covered oddments.

The Allusionist started because Radiotopia's progenitor Roman Mars was a longtime fan of my first podcast, Answer Me This (b.2007). I have been interested in how language works ever since I became verbal, so I pitched Roman a show that would be a bit like his show, 99% Invisible, but about language instead of design. Lucky for me, he went for it.

To be honest, starting a podcast is rarely an interesting story. One day you haven't distributed an audio file via RSS over the internet; the next day, you have. I feel I should have made up something more exciting for you.

What’s the best board game ever?

What song do you find yourself humming involuntarily?

'Proud of Myself', by a British band called Lincoln who did a handful of beautiful records early this century, then disappeared. The title is, I assume, ironic; pride in oneself is not a prominent British trait. I'm certainly not proud of myself.

Who would you relish being stuck in a lift with?

A lift engineer. Preferably one who is also listening to podcasts on headphones so doesn't want to chat with me while they fix the lift.

Who would you gladly punch tomorrow?

Tomorrow I'd punch my today self for not getting enough work done and thus making tomorrow extra-stressful. Also, I've never punched anyone before, so I'd want to practice alone so I get it right if ever the necessity does arise.

Do you text in longhand?

I do. It's not the olden days when texts had to be a maximum of 160 characters. Punctuation and keeping the vowels don't cost extra.

Do you still write ‘proper’ letters?

I don't. I barely even send birthday or Christmas cards. But whenever anyone sends me one, I love it and keep it forever. Yes, I operate double standards, letters-wise.

Which film do you regularly quote from?

I often quote Piper Laurie saying, "They're all gonna laugh at you!" in Carrie. Usually at my husband, to make him more worried that the world is judging and mocking him.

Tell us the last joke you heard?

I have never heard a joke. Not one.

Do you share your bag of boiled sweets on long train journeys?

I recently took a 37-hour Amtrak ride from Denver to Emeryville, and I tried offering fellow passengers my unopened breakfast yoghurts, but they didn't want them. On that journey I did share a two-hour conversation with a woman about the French taxation system, but if I'm honest, 'share' and 'conversation' would be more accurately replaced with 'receive' and 'monologue'. It's all take take take with me. On London trains, I share something even better than boiled sweets: in summer, I carry a hand fan with me everywhere, as most places here don't have aircon and it gets very hot and sweaty. So strangers come up and stand with me, and I fan them. Top tip from me to you: if you're lonely, spend £2 on a fan and you'll make lots of new friends. 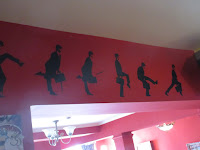 Tomorrow night should be fun: a bunch of us are going out for a couple of pre-meal drinks followed by a bite to eat in the Bollywood Lounge. Yep, it'll be fun (especially as I'll be in a town that I have no nocturnal knowledge of whatsoever).

But, later on, when we slip anchor and two crazy ladies join the proceedings, the chances are it will get silly. Very silly. 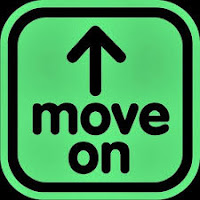 My friend Bob now resides on the other side of the world. He and Bernie upped sticks one day, grabbed up the kids, and took the next flight out of Heathrow. Or that's how it seemed at the time.

Before Bob left he was writing songs for fun: he was a one man songwriting machine. This was one he was desperate to be picked up by a 'name'. It's good enough too, it really is. There's still time.

I've got one or two myself that I would love a 'name' to pick up on. One day. Maybe.

Tell me now so I know 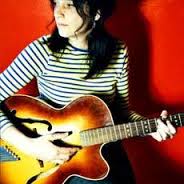 Rejoice: Artog's back! Mars was obviously not all it's cracked up to be and he's come back down among us and rejoined his fellow earthlings. Nobody else I know can get as much mileage out of the mundane like Artog. Lighthouses, beer mats, benches; don't get me started on benches.
His current post reminded me about the time Holly Golightly joined Rocket From The Crypt on stage at The Forum and in so doing made a great night even greater. Greaterer? When I got home and sobered up I'm sure the first thing I did (certainly the second thing, anyway) was to buy the splendid album she'd just made with Billy Childish.
But, like Artog, my favourite Holly Golightly moment is also a cover. But not just any old cover. It comes from the pen of Ray Davies.


Holly Golightly - Tell Me Now So I Know 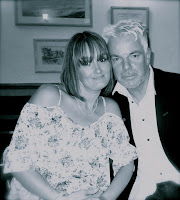 My life has been flashing before me this week. In a good way, I hasten to add; it’s not been as the result of some near death experience. On the back of seeing Claire on Monday, I had a great time with Marie (who joined her sister Claire up here for a couple of days) last night and was, for the most part, hanging on my eldest step daughter’s every word. She got married two weeks ago. Who knew? Not even her mother (the first Mrs. Medd) apparently. Gretna Green played host to her and Matt’s elopement. A nicer fella you couldn't wish to meet.

And, by her own admission, Marie's truly happy for the first time in a very long time.