James Riggsby, Jim to his friends, drove Routemaster buses in London all his working life. He left school in 1929, aged sixteen, and after just three months of training, five weeks before his 17th birthday, became a conductor. Three months later London Transport put him in charge of his very own bus. He drove the 139 from Cricklewood to Oxford Circus, a route he made his own until he retired in 1978. Jim lived most of his life in Kilburn and, even on his days off, he could be seen outside his flat waiting for the 139 to Lord's for a day at the cricket. A busman's holiday, I guess.

He would joke with the staff at the nursing home where he lived for the last eight and a half years that, if he did make it to 100, he would expect Her Majesty The Queen to catch the bus from Buckingham Palace to Kilburn to deliver his card by hand. Unfortunately, Jim passed away earlier this year. He was 98.

Speaking to his son, Les, it would appear that his father kept a diary at work. He would fill it in each evening after his shift (or early morning, if he'd been driving the night bus) whilst having a cup of tea in the staff canteen. Apparently the book is jam packed full of anecdotes and reads like a real life version of On The Buses.

Jim even had a few celebrities on his bus including Max Bygraves, Michael Caine ('he was carrying a bunch of flowers and an attache case with a pair of socks poking out the top') and Princess Margaret ('she was hiding under a headscarf and was wearing dark glassss, but you can't hide royalty').

But it's the entry for 8 August 1969 which makes the most interesting reading: 'Driving down Abbey Road this morning and see a geezer in the middle of the road, in front of the zebra, standing on a pair of step ladders with a camera. Four long haired layabouts then cross over the road and then come back again. And then back again. Blooming traffic was queued right back. What was that all about then?'
Posted by John Medd on Wednesday, August 31, 2011 5 comments:
Labels: 139, Abbey Road, James Riggsby, Kilburn, Les Riggsby, Lord's, Max Bygraves, Routemaster Buses, The Beatles

Stop the world, I want to get off 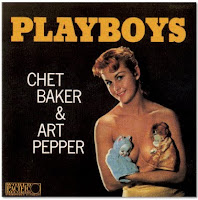 It's been said many times, I know, but buying new albums these days is a very sterile affair. We just don't have the same emotional attachment to CDs as we did with shellac* and vinyl; the sanitised sound with all the goodness taken out, liner notes which can only be read with the aid of the Hubble telescope and, please, don't get me started on digital downloads - Artwork? What artwork? I'm just grateful that the great jazzers never lived to witness the iTunes phenomenon; coming home on the bus with a hallowed copy of Playboys under your arm is an experience that can't be replicated by hitting the 'Are you sure you want to buy and download Black Eyed Peas?' button on a laptop - where it will be dumped in your library and, almost certainly, languish unlistened to for the rest of time. Nurse! The screens!

OK, shellac was before my time, but it scans, alright? 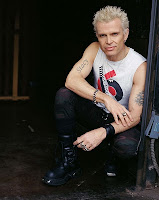 'The biggest misconception people have about me is that I'm stupid'

Billy Idol recently tweeted that he's writing his memoirs. As coffee table books go it bears all the potential hallmarks of an interesting read; depending on how selective his memory is it should be a tad deeper than a copy of, let's say, Hello! magazine. I say should: he'll no doubt want to concentrate on the superstar years but I'm more interested in The Bromley Contingent, Chelsea, Generation X, playing darts with John Walters and whether or not he tuned his own guitar. His publisher, on the other hand, will probably insist that the early days are glossed over in the first chapter with the emphasis on White Wedding, motorbike crashes and his Hollywood Hills nubiles.

Either way, William Albert Broad and his chums in Generation X (Tony James, Derwood Andrews and Mark Laff) provided the back drop to one of the most memorable nights in the life of your humble narrator: on 2 December 1978 they played West Runton Pavilion on my best friend's 18th birthday. We spent the whole gig down the front dodging the gob. And flying beer cans. They were utterly brilliant. Unfortunately, no footage of the gig exists. Unlike the second time I saw Idol in the flesh nearly 30 years later at Nottingham's Rock City. I was covering the gig for the local paper and although I didn't quite do a hatchet job on him, I did receive hate mail from some of his adoring fans. He was quite clearly past his sell by date and, check my video (below) at 31 seconds, his microphone throwing* capabilities were not commensurate with those of a card carrying rock star. In fact, they were pretty sh*t.

I'll be interested to see if either of the above shows gets a mention. I shan't hold my breath. 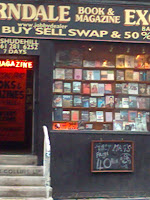 Spent the day with Number One Son in Manchester yesterday. Despite what you may have heard, the city centre wasn't overrun with Scallies burnin', lootin' and robbin'. They were probably all in front of the judge being given their seven week suspended sentences (that'll have them quaking in their recently acquired footwear). 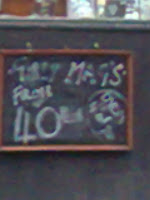 Now that is wrong on soooo many levels.

For one afternoon only 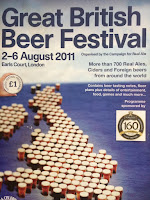 It's not often you can drop into conversation the fact that you're playing Earls Court. But that's precisely what I'm doing.
Tomorrow afternoon at 1.30, at the annual Great British Beer Festival, I will be speaking with Sue Nowak at a tutored tasting, A Slice Of Real Ale, where I will be gabbing on about Medd's Bread.

And, not unlike The Who, Pink Floyd and The Rolling Stones before me, it's sold out! I told you my bread would be world famous, didn't I?

I'll drink to that