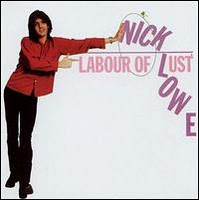 The latest installment in Nick Lowe's back catalogue re-release campaign continues apace with the remastered Labour Of Lust (originally released in 1979). Recorded simultaneously with his Rockpile compadre Dave Edmunds' Repeat When Necessary (they shared the same studio and power combo) it's lost none of its vim in the thirty plus years since it was first committed to vinyl.

The peerless Cruel To Be Kind (which, interestingly, shares the same chord progressions and harmonies as The Love I Lost by Harold Melvin and The Blue Notes) opens proceedings and within the first few seconds you can see why they opened for Blondie in the States at a time when powerpop was dominating American FM radio. 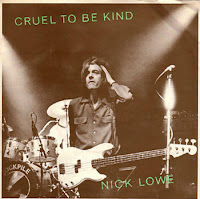 Cracking Up follows (another song that was lifted as a single) and a perfect vehicle to highlight the harmonies of Lowe, Edmunds and the often overlooked Billy Bremner. It's nice to see the inclusion of American Squirm which didn't make the album first time around; originally a single he recorded with The Attractions it's quite at home here in it's new surroundings. You Make Me finds Lowe dropping down a couple of octaves and with just his acoustic guitar it's reminiscent of Lowe's later output (it predates his Impossible Bird/Dig My Mood/Convincer trilogy by nearly fifteen years). The Mickey Jupp penned Swithboard Susan still fizzes and Endless Grey Ribbon tugs at the heart strings and then it's one of Lowe's many signature tunes: Without Love, sounding like a Johnny Cash cover, was every inch a Lowe original but was later adopted by his one time father-in-law and took up permanent residency on Cash's set-list. Dose of You and Love So Fine combine punchy prose and jangly guitars before the mournful and touching Basing Street (another welcome bonus on this re-release) wraps up this delightful snapshot in time from one of Britain's greatest living songwriters.

The promo video for Cruel To Be Kind also, bizarrely, doubled up as Nick Lowe and Carlene Carter's wedding album:

Fans of Barney Bubbles will know the artwork for Labour Of Lust was the work of the late eccentric graphic artist. A recent exhibition in London was attended by many artists who'd experienced the Bubbles treatment.