It was fifty years ago today 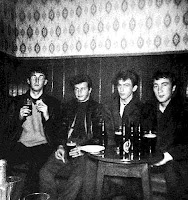 It's probably an age thing, but I that find going to gigs these days can be very traumatic; if it's not some f**kwits behind me talking throughout it'll be some clown in front of me with a camera phone who'd rather watch the entire gig through a viewfinder (why exactly, to watch it virtually in their bedroom on a computer screen when they get home?) than watch it unfold live in what I still like to call real life.

Until the advent of this micro technology it was a rare sight indeed to see anyone filming bands on stage. Imagine, then, the stir this piece of footage caused when it was unearthed at the end of the last century; it might only be a few seconds of silent 8mm cine film (shot on February 14 1961 at The Casanova Club in Liverpool) - but it's pretty amazing nonetheless. Then again it is The Beatles and it's in colour. It was only five days earlier they'd played The Cavern for the first time.

This is the oldest known live footage of the Fabs, though some Beatles academics are still undecided if it was from Valentine's night 1961 or February 10 1962 when they tore up the Church Hall in Birkenhead.
Posted by John Medd on Monday, February 14, 2011
Labels: 100 Posts, 1st. Anniversary, Casanova Club, cine film, The Beatles