Heart on my sleeve 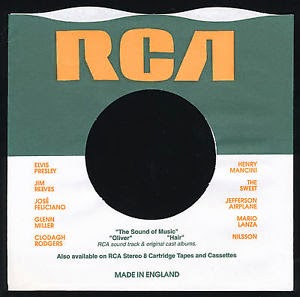 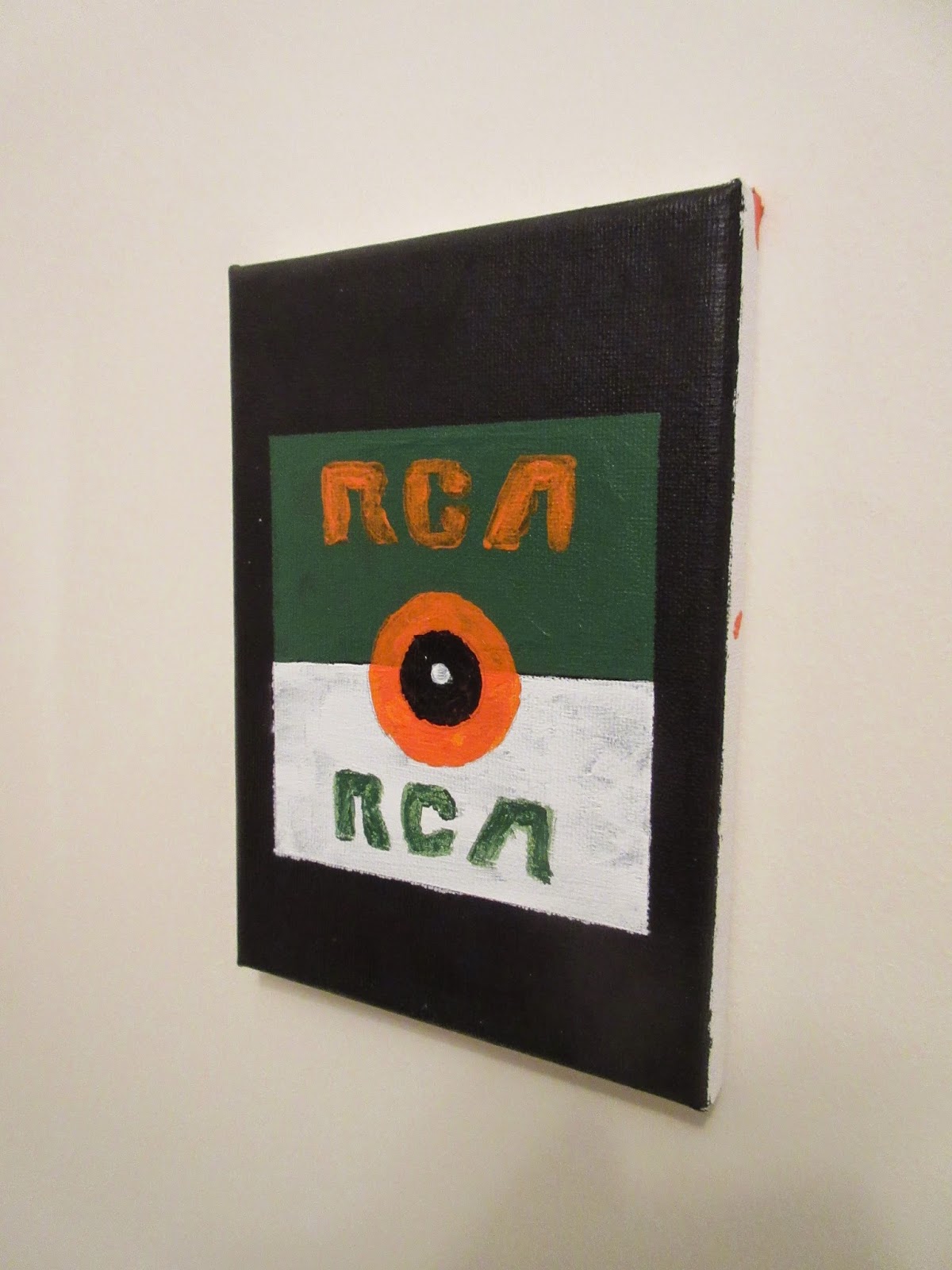 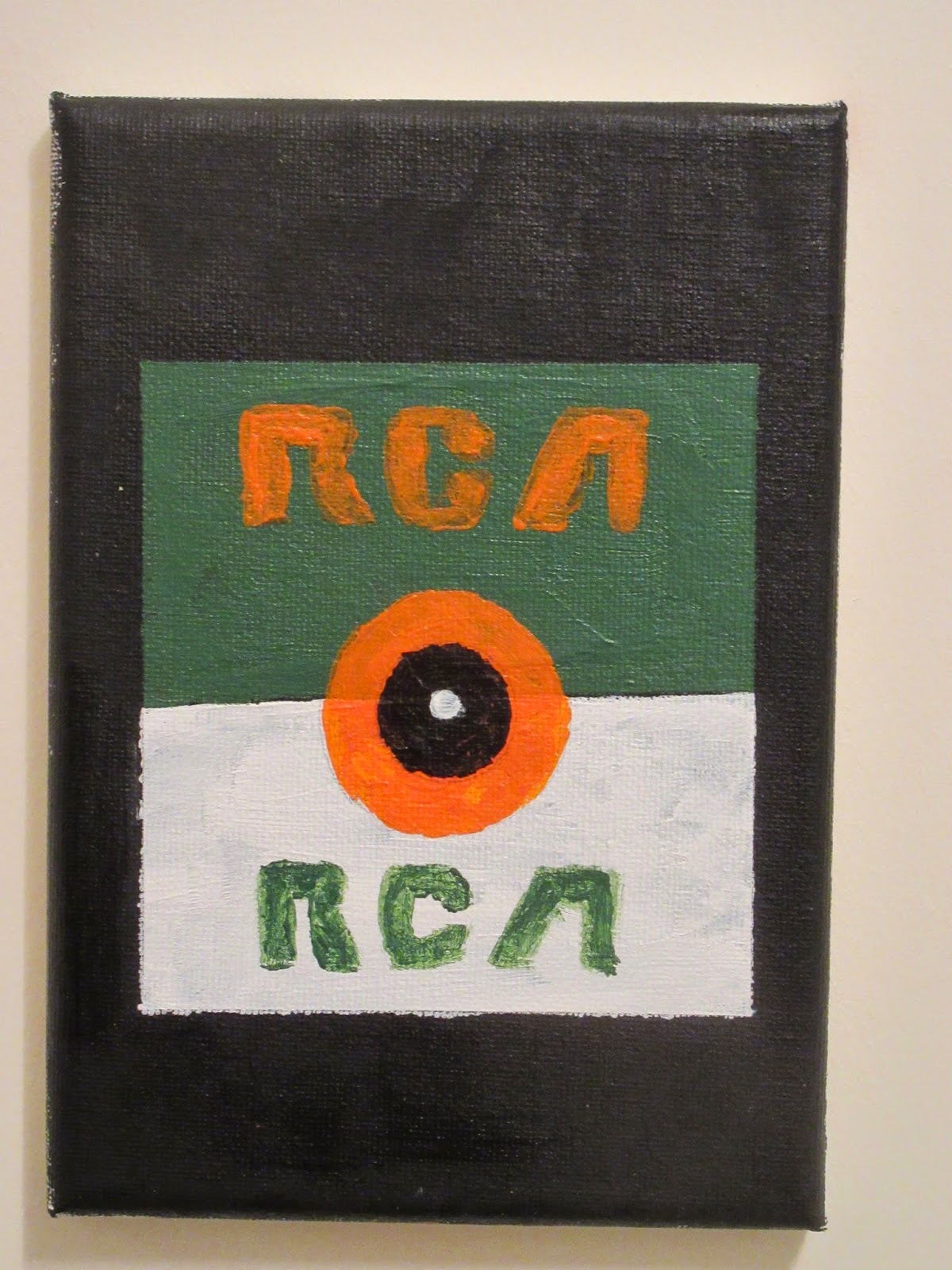 My love of the green and white RCA single paper sleeve is well documented in this blog. That I would love to wallpaper the house (or certain rooms, anyway) in the RCA livery is no secret.

You can even buy replicas of them these days (above); though I must have enough original Sweet and Bowie 45s alone to do at least a couple of walls.

My friend Tony did some lovely miniature canvases of classic RCA sleeves for me recently. But, as you can see, I had to have a go myself.

I used to be a star-kicker. Though these days just getting out of my armchair finds me making that sound your grandparents used to make when bending down. I can't even use Townshend's adage 'I look pretty young but I'm just backdated.' I'm just backdated.

My fellow blogger, The Swede, is spending the next 55 days counting down to his 55th birthday. I just hope he remembers when he gets there what he came for. TS predates me by only a handful of months, so it'll be interesting to see the overlaps between his timeline and mine. Our shared love of music (my main reason for embarking on this blog five years ago) being the obvious one. Come my next birthday, apart from being older and greyer, I would like to think that my sherpa, in the guise of The Swede, will be there to to meet me at the summit with a glass of something warming and tell me that 55 is not as bad as it sounds.

That's easy for you to say 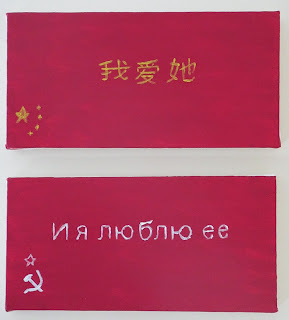 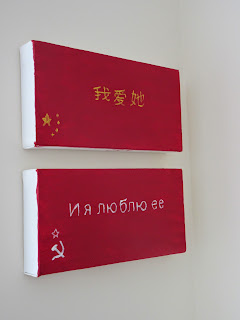 It will come as no surprise to you that I speak neither fluent Chinese or Russian. Notwithstanding these two obvious handicaps, I've knocked up a couple of Beatles related pictures that, I pray, won't offend any visitors hailing from these easterly sectors*. I really hope I've nailed it and that I'm not calling my best friend's mother a whore or any other such translational f*ck-up. I was originally going for All You Need is Love, but it was way too many characters for the size of canvas. So, here are 我爱她 and И я люблю ее. I think.

* Amazing as it may seem, Russians account for 10% of my regular readership
Posted by John Medd on Saturday, February 21, 2015 4 comments:
Labels: And I Love Her, Art, China, Russia, The Beatles, И я люблю ее

When getting to the top of the flight stairs and boarding a plane, I've never turned left. I've never been bing-bonged whilst waiting at the gate and been told that it's my lucky day. Never had the reclining chair that folds flat into a bed or been served courtesy Moët at 10,000 feet by a glamorous flight assistant. No, I've always been herded right with the rest of cattle class in search of my lousy billet; to the scuzzy plastic seat with zero legroom and all the associated charms associated with economy air travel.


Oh to be on the other side of the curtain. Just once. Do they still have real fireplaces through there?
Posted by John Medd on Tuesday, February 17, 2015 2 comments:
Labels: Led Zeppelin

At the arse end of 1972 I managed to scrape enough pennies together to buy my first ever single. I'd heard it on Top of the Pops the week before and I just knew I had to own a copy. It was Gudby T'Jane by Slade and, as I was to find out when approaching the counter of the Music Inn, it was on the Polydor label. Around that time you'd see many other Polydor releases in either the singles or album charts: Hendrix, Focus, The Hollies, The New Seekers and Rory Gallagher to name but a few. But it was a much bigger hitter than any of the above who bankrolled the label. Thanks to my parents and people like my parents, whenever they had the neighbours round for a shindig, it wasn't just impregnable tins of Watneys Party Seven that made parties go with a bang. Oh no, it was a bearded white suited bandleader from the Low Countries. That's right, James bloody Last.

Even now, whenever I see the red and black label I always think of Slade. Ask my dad and he'll no doubt tell you the Dutch Master.


This blog is five years old today. Thank you to everyone who has taken the time to stop off and shoot the breeze with me. I do appreciate it. 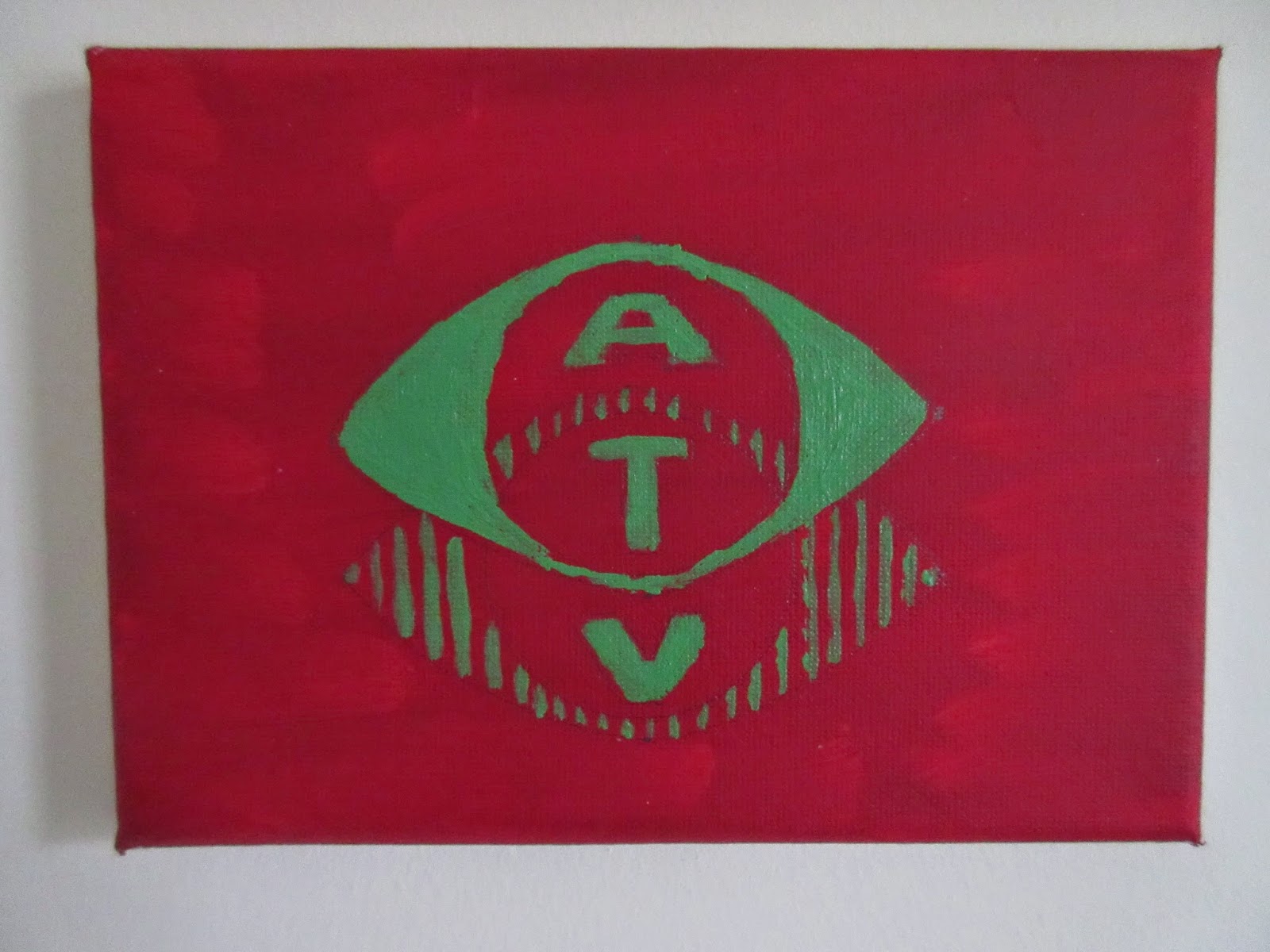 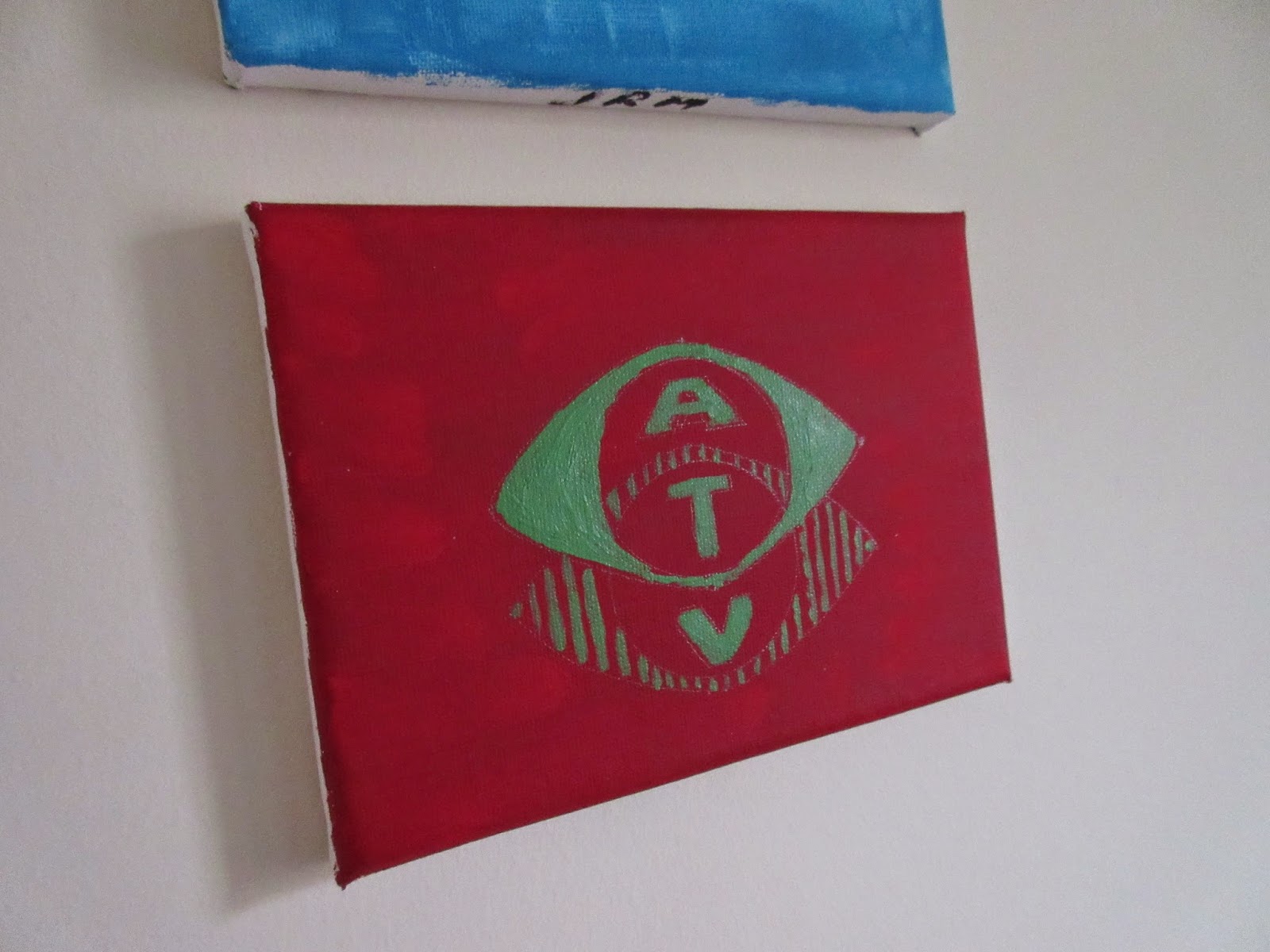 The brushes came out early this weekend; Jenny stayed in bed all morning trying desperately to shake off her cold/bug/fever, so out came the pop up studio. The two resulting canvases, 'ATV' and 'Marquee' are pretty self explanatory. Growing up in the Midlands in the seventies, ATV was the default ITV transmitter (though our aerial would often pick up Anglia and Yorkshire if the atmospherics were right). The opening credits, usually blue and yellow in colour, remain etched on my retinas. However, I've painted the red and green livery often used to herald Tiswas on Saturday mornings. And for any TV historians out there, this year marks the programme's fortieth anniversary.

The Marquee in Wardour Street W1 is often name checked around here. It was tacky, it was loud, it was marvellous. And its stage backdrop was iconic. 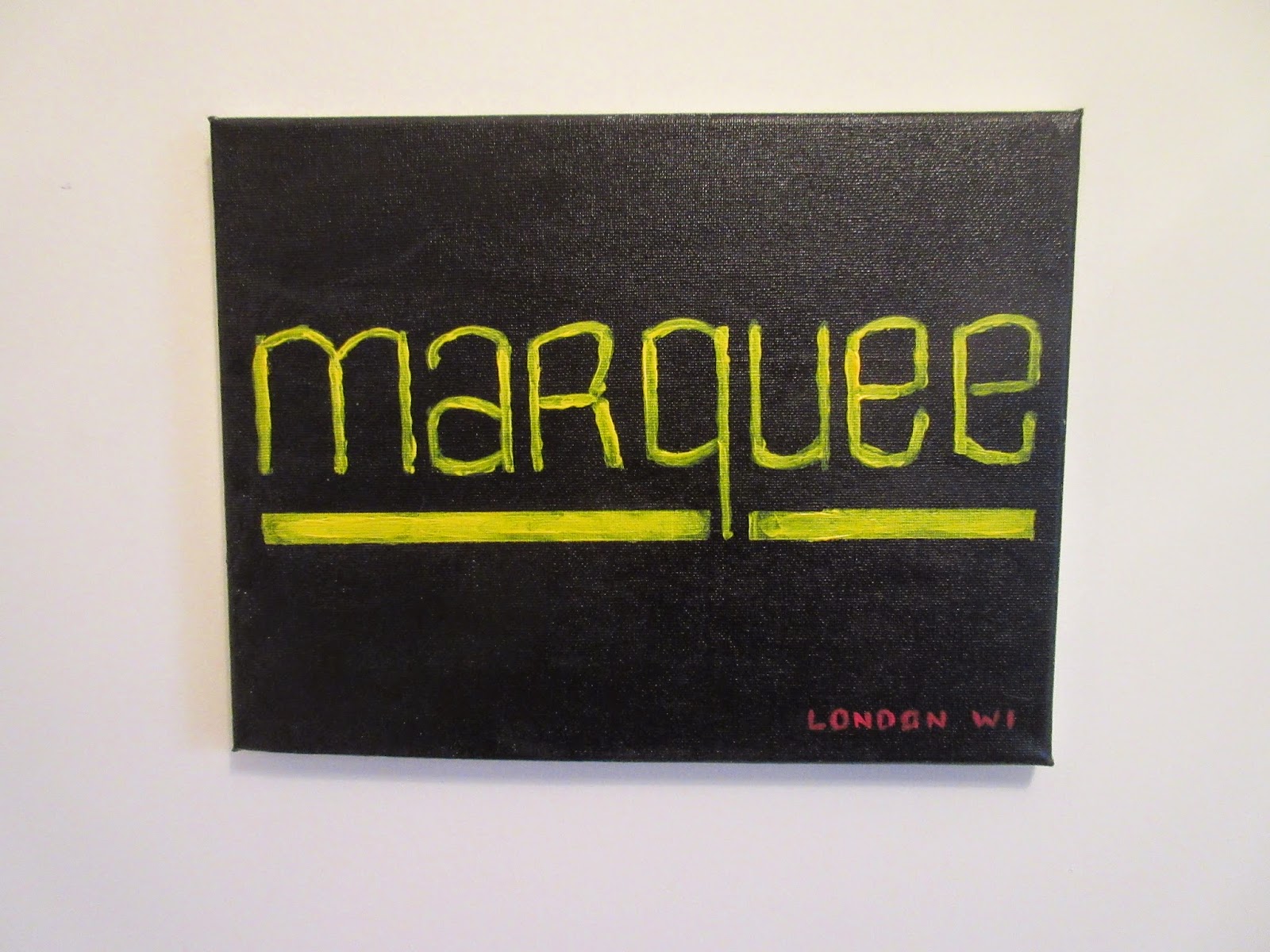 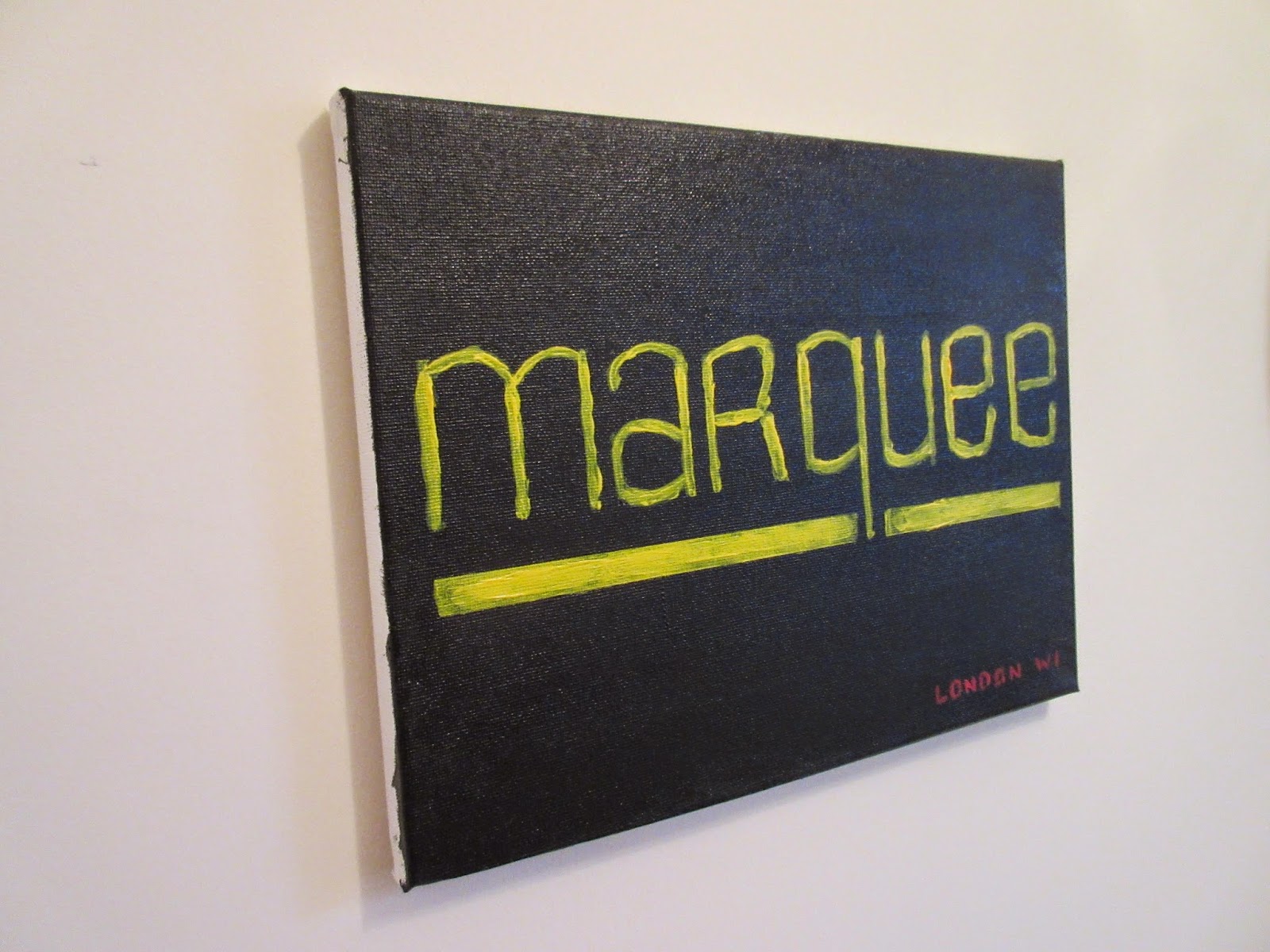 I'm thinking of starting a new website just for my canvases. I only started doing them just after Christmas and already I've got the makings of a small (but perfectly formed) exhibition. I don't profess to be an artist, I'm just a man who owns a few paint brushes. But I do enjoy throwing a bit of paint around on a Saturday and Sunday morning.

Kick started by my piece yesterday on Ian Fleming and his alter ego James Bond, today's artwork pays homage not only to them but also the ex-Beatle who was asked to write the theme score for Fleming's second Bond novel. Live and Let Die was first published in 1954 but wasn't given the big screen treatment until 1973. Fleming had died ten years earlier so only ever saw Dr. No and From Russia With Love come to life in Technicolor, in 1962 and 1963 respectively; both starring Sean Connery.

Live and Let Die was Roger Moore's debut playing Bond and was every bit as cheesy as you'd expect from a one trick pony better known as The Saint and the English half of The Persuaders. Paul McCartney still drops the song into his live set. Moore, too, is still dining out on it.
Posted by John Medd on Sunday, February 08, 2015 2 comments:
Labels: 1974, Art, Ian Fleming, James Bond, Macca, Penguin

I'd rather die of drink than of thirst

There are nearly as many Ian Fleming quotes about drinking as there are James Bond dust jackets.

My favourite is a line from Casino Royale which I often quote myself.

And quite where the (very blurred) line between Fleming and Bond really was is anyone's guess. Fleming was a serial womaniser and was rather partial to the bottle. He died in 1964 after a second heart attack aged just fifty-six, though he looked a good ten years older.

That may have had something to do with his diet: Fleming smoked seventy cigarettes a day and drank an entire bottle of gin. When told by his doctor to give up the gin he simply started drinking bourbon instead. 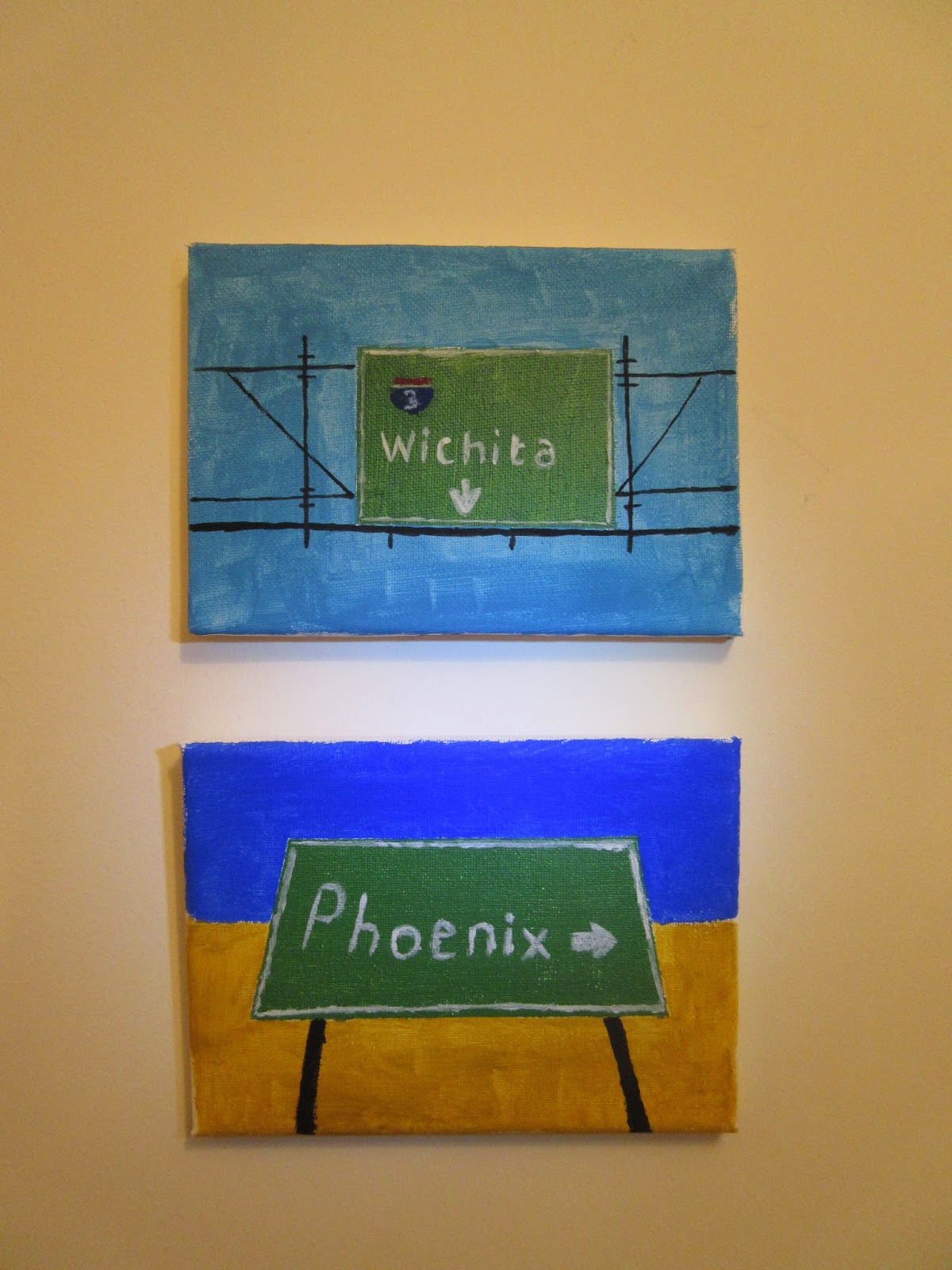 Jimmy Webb gave Glen Campbell three geographically themed monster hits in the sixties that, to this day, remain Campbell's legacy: Galveston, By the Time I Get to Phoenix and Wichita Lineman. Campbell, the original Rhinestone Cowboy and one time Beach Boy, now suffers with Dementia and will probably never sing them again.

I had these songs in my head when I woke up this morning, so this week's canvases practically painted themselves.

Before Johnny Cash bowed out in 2003, as part of his Rick Rubin produced series of American albums, he recorded, for me, the definitive version of Wichita Lineman.