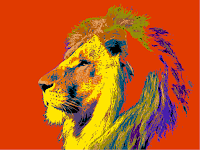 I can't write songs to order; they just don't come out that way. Some people can hail them like taxis. Not me, alas. On Monday night at Songwriters I resorted to playing a couple of old tunes that I've had knocking around for ages. So as I left I half promised everyone that 'I should have something new next time.'

This morning, I locked myself away in my man cave with my guitar, 'the book', a mug of tea and a general feeling of optimism. I emerged a couple of hours later like a proud parent with a brand new song in my arms. Result! I've called it 'Can I See The Lions' and I'm hoping to record it sometime next month - along with a couple of its older, still unrecorded, siblings: 'All You Need Is All You Need' and 'It Is What It Is, We Are Where We Are'.

Until then, here's another Lion Song I'm rather partial to.

Two Shots of Happy, One Shot of Sad 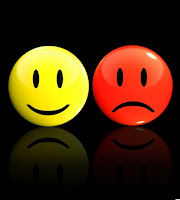 It's common knowledge that Bono is a spunk trumpet. Everyone knows that, and the reasons why.

And yet, and yet... he only went and wrote Two Shots of Happy, One Shot of Sad. Was total and utter global domination with U2 not enough for the little fella? Apparently not. The story goes that The Ego was quite pally with Frank Sinatra. And, just because he could, he wrote a song for him. However, Ol' Blue Eyes passed away before he could commit it to tape. (Daughter Nancy, though, would later give it the Sinatra treatment.)

I don't remember how, when, why or where I first got hold of Matt Dusk's version of the song, but it's been living on my iPod for bloody ages. And, every now and again, it crops up on shuffle. As it did today. Interestingly, I only found out relatively recently that Bono had written it. Just goes to show, a good song is a good song. No matter who writes it. Still doesn't stop him from being a spunk trumpet.


Matt Dusk - 'Two Shots Of Happy, One Shot of Sad' 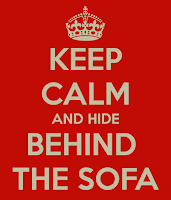 I'll admit it, horror films still scare the crap out of me. If I lived on my own I don't even think I could watch one at three o'clock in the afternoon with the sun streaming in through the windows; let alone after dark, with the lights turned out.

'Tango' is a short film. It's a surreal film, not a horror film by any stretch of the imagination. But a very intimidating film, nonetheless. It's also, for some inexplicable reason, a film I come back to time and again. And, when I do, I feel ever so slightly uncomfortable. It unnerves me. 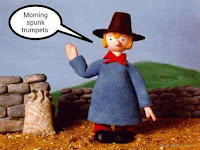 As in, 'Bono is a spunk trumpet.' Although the jury is still out as to whether or not it should be hyphenated, its definition, Urban or otherwise, is pretty self explanatory. For the most part.

Try and drop it into casual conversation, or maybe an email, today. Put it in "speech marks" or italics and no one will be offended. Let me know how you get on. 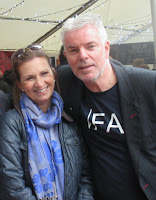 At a time in her life when most women her age have become 'ladies who lunch', my friend is tearing up the rule book. It's long been Jackie's dream to escape the shackles of suburbia and the Partonesque 9 to 5 drudgery. And she really has wanted this for a long time: most young girls at the age of eight wanted a pony - Jackie wanted to be a Trolley Dolly.

And so, after a life spent taking meeting minutes and making coffee for lame brain bosses, she has undergone some serious X-Factor style auditioning and interviewing and, last Friday, received an email informing her that her tenure at British Airways as part of their hand picked cabin crew - working out of Heathrow - begins next month. And, if I know Jackie, I'll put money on the fact that within six months of getting the gig she'll have made the front bit of the plane hers: taking care of all your First Class needs.
Posted by John Medd on Tuesday, October 18, 2016 No comments:
Labels: Never Too Late

A friend of mine thrust the global best seller everyone's banging on about in my hands last week and said: 'John, you might like this.' She was right. I did. But why did I feel guilty for enjoying The Girl on the Train as much as I did. Was it because...


...it doesn't pretend to be anything other than a glorified Whodunnit?

...in true Blackadder style, it twists and turns like a twisty turny thing?

...I'd never thought of anyone doing that with a corkscrew?

...I too find myself gazing from trains into houses that back onto the line?

...its cheesy Scooby Doo confession at the end ('And if it hadn't been for you meddling kids, I'd have got away with it') worked precisely because it was cheesy?

Or was it just because it's a cracking page turner that can be read in one sitting? Anyway, it's saved me the bother of watching the equally hyped film which, apparently, has moved the story from London to New York for no good reason and, by all accounts, has about as much tension as the Postman Pat movie.
Posted by John Medd on Monday, October 10, 2016 2 comments:
Labels: The Girl on the Train 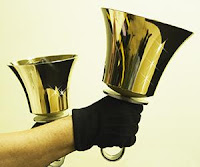 I'm neither an inventor nor a maker - I leave that to the Number One Son. But, I have, in the last couple of weeks, invented a drink. A cocktail, if you will. This, I assure you, is my first venture in this sector; I don't claim to be a mixologist. First things first, let me give you the back story.

Whenever Gordon comes up to see us he always comes bearing gifts - flowers for Jenny, some obscure 1960s cutting from the Hull Daily Mail for me and wine for all of us. And, invariably, he augments all of the above with a bottle of Bell's. My parents have won more bottles of hooch over the years in raffles, Conservative Club draws and Golf Club tombolas than you can shake a shitty stick at. A fair percentage of this haul has been Bell's whisky. And because neither of them were whisky drinkers they've been stockpiling this most average of blends in their pantry under the stairs.
However, now the old man knows I like whisky (I do love single malts) he is now siphoning off his whisky lake and flooding us with the stuff instead.

Of course, I can't tell him that I really should be cleaning the drains with it. Instead, I grappled with the idea of disguising it - and that's when I had my light bulb moment.

So, here is my step-by-step guide to make a perfect Hold the Bells. See what I did there?

* Into it pour two fingers of Bell's

* Top up with Dandelion & Burdock

* Now suspend belief and add 3 or 4 dashes of Hendersons Relish, Lea & Perrins if you don't have South Yorkshire's finest

* Whisk to within an inch of its life

There you go. Make one tonight and impress your sophisticated (and not so sophisticated) friends. Money back guarantee if you're not fully satisfied.
Posted by John Medd on Saturday, October 08, 2016 4 comments:
Labels: Bell's, Gordon Medd, Hold the Bells, The Fast Show

I'm all over the place at the moment. And treading water at the same time: selling a house in a post-Brexit world was never going to be easy. But, it will go - sooner or later. I know where I want to be, and it's not here. So, for the time being, life is kind of on hold. 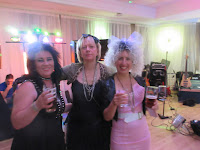 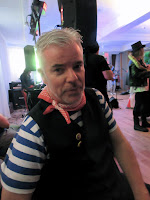 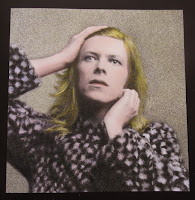 I've just listened to the latest Word podcast and was enthralled by Paul Morley talking so eloquently about David Bowie: Morley's biography of The Dame, 'The Age Of Bowie', has just been published and it's Morley's very personal take on probably one of the most influential players in the history of popular music.

The Bowie section on my bookshelves is very minimalist. I bought George Tremlett's sketchy paperback, 'The David Bowie Story', whilst still at school and not long out of short trousers. Tremelett's tome was quite literally a snapshot in time, ending as it does with Ziggy's retirement bash at Hammersmith Odeon in '73.

Sitting alongside Tremlett is 'Any Day Now - The London Years: 1947-1974'. And it is just that. Kevin Cann has put together an exhaustive encyclopedia of Bowie documenting what he was doing - and who he was doing it with - every single day between being born in January1947 and the day he left Britain in March 1974. 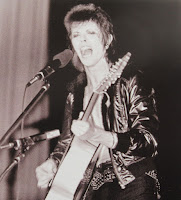 Whilst Bowie's influences are as far reaching today as they ever were and his stock, since his demise earlier this year, has never been so high, it's the years 1971-1973 when, for me, Bowie was most exciting. Seeing him on Top of the Pops playing Starman with his blue acoustic guitar, hearing Hunky Dory for the first time and getting giddy when Ziggy Stardust and The Spiders from Mars took rock and roll into a new theatrical dimension, is a unique sequence of events I feel privileged to have witnessed first hand.

Picking out random October days from these special years you can see the speed at which he was gaining traction. Space Oddity would not become a novelty hit ball and chain he would forever drag around and he was still a million miles away from Berlin. So, with the Beatles now safely in their grave, the stage was set for Bowie's grand entrance.

The Man Who Sold The World is finally released and his song Oh You Pretty Thing is released by Peter Noone. His son Zowie (Duncan Jones) is born and he meets Andy Warhol for the first time in New York. He also plays Glastonbury Fayre - just as the sun is coming up.

Tuesday 19 October. Preview copies of the new album, Hunky Dory, are pressed with a final track listing and mix.

Hunky Dory charts in the US and Ziggy is unveiled for the first time. He gifts All the Young Dudes to Mott The Hoople and produces Lou Reed's Transformer.

Friday 6 October. The Jean Genie (or 'Dream Genie' as its called on the tape box) is recorded in RCA's Studio D. 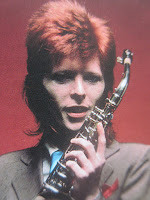 A year bookended by Aladdin Sane and Pin Ups with Drive in Saturday and the death of Ziggy somewhere in the middle. By now he's huge - both over here and, all importantly, over there. Over there being America and Japan and most of the English speaking world.