You can call me Bill 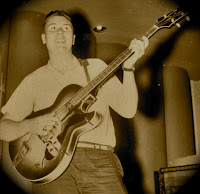 My Uncle Bill sadly died over Christmas. Not strictly an uncle, what I really mean is that he was our next door neighbour when I lived in Hull in the 1960s. My parents still kept in touch when we moved away and exchanged Christmas cards with him up to and including this year. And even though we weren't related and his name wasn't Bill - it said Brian Ian Lambert on his passport - he was still a lovely man. A gentleman. And a well respected musician on the Hull music scene in the 60s and 70s.

But Brian wasn't called Bill because of his initials. Born in 1934 he was known by family and friends alike as Bri - until the week before his thirtieth birthday: because on 21 September 1964 he became part of Rock and Roll folklore.

The Rolling Stones had never been to Hull before. Their train pulled into Paragon Station just before midday on that late summer's morning; they were due to play two gigs at The ABC Cinema that day - an afternoon matinee and an evening performance. Whilst the road crew were setting up their equipment, Mick and the lads went to grab a bite to eat. With the afternoon gig scheduled for 2.30 they had plenty of time to get back for the show. But when lunch turned into an impromptu pub crawl it soon became clear that Bill Wyman was drinking two pints to everyone else's one.

They were half an hour late for the first show. Wyman, never one to move around much on stage at the best of times, planted himself next to his amp and looked like he'd just been dug up; between numbers he was throwing up into a hastily found bucket behind the stage curtain. He managed to complete the set but within five minutes of the curtain going down, the paralytic bass player was in his hotel bed. It was obvious he wouldn't be in any state to play the evening performance so the band's manager Andrew Loog Oldham was on the phone to find a stand-in. By 7.00 (an hour before show time) Oldham drew a blank. With everyone he knew back in London he'd have to look for a local musician. Ordering a drink in the hotel bar he asked the barman if he knew of anyone. 'I play a bit' said Bri.

Ten minutes later he was whisked to the venue to soundcheck with the rest of the band and learn a dozen or so songs he'd only ever heard briefly on Radio Luxembourg. Apparently Keith told him to 'do everything I do and you won't go far wrong.' It went well. Mick introduced him as 'our new Bill' and Brian said 'you're better than the old Bill.' So from that night on he was known as Bill. When I asked him many years later if he still dined out on the story, he replied 'What do you think?'
Posted by John Medd on Tuesday, December 27, 2011 7 comments:
Labels: Andrew Loog Oldham, Bill Wyman, Brian Lambert, Hull, Radio Luxembourg, The Rolling Stones

Doing anything for Christmas? I'm time shifting. Trawling through the Radio Times double ish is never easy at the best of times, but, once I've established what's on BBC Radio 4, 4X, 3, 6, 2, Ulster (Gerry Anderson) and Wales (Rhod Gilbert), I'll be able to sort out my holiday podcast listening. I shan't be bothering with the telly - too many box sets to wade through.

If I don't see you before, have a good one.
Posted by John Medd on Monday, December 19, 2011 3 comments:
Labels: Christmas, Gerry Anderson, Radio Times 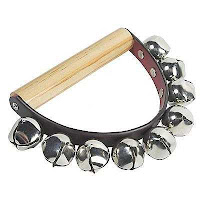 Thankfully, The Sweet never released a Christmas single. I'm sure that back in the day the band's mentors, Messrs. Chinn & Chapman, would have moved Heaven and Earth so their charges could have followed the well trodden Slade, Wizzard and Mud path. However, in 1974 the intro to the group's own composition Own Up, Take A Look At Yourself (the B side of Chinnichap stomper Teenage Rampage) opens with some very evocative sleigh bells.

Parker and Light Fingered Fred discuss going it alone
TV spin-offs generally fall into two camps. They're either runaway successes that leave the mothership without a backward glance. Or they fall flat on their arse with ensuing death threats to the writers and actors, even The Radio Times. We all know the good guys - Frasier (from Cheers), Knowing Me, Knowing You with Alan Partridge (The Day Today) Parsley (The Herbs) to name but three. And the baddies - Going Straight (Porridge - what were Clement and Le Frenais thinking?), Charles Endell Esq. (Budgie - probably the only time Keith Waterhouse took his eye off the ball), The Pebbles And Bam Bam Show (The Flinstones), Joey (Friends) and so the list goes on.

But I think the filing cabinet should have two more drawers; the writers (sometimes) give us a brief glimpse of what could have been: Matt Groening knew that Chief Wiggum could have gone the distance - we all remember The Simpsons Spin-Off Showcase and the all too brief Wiggum PI. And then there's the bottom drawer. Spin-offs that were only ever made in our heads. My candidates for this treatment would include the identically dressed Howard and Hilda from Ever Decreasing Circles who would often leave dinner parties early to listen to The Shipping Forecast. I'd also pluck the two hapless Detectives from The Beiderbecke Trilogy who, with the help of Alan Plater, were given some fabulous lines. But, if push came to shove, my first choice would be Light Fingered Fred - Parker's jailbird buddy from Thunderbirds. Gerry Anderson gave the blundering con enough pathos to guarantee ratings week in week out, if he'd have so wished. In fact I'd have put the pair on at The National in Waiting For Godot. Well they gave it to Rick and Vivian, didn't they? Sorry, Mayall and Edmondson; who were, in turn, spin offs themselves.
Posted by John Medd on Wednesday, December 07, 2011 3 comments:
Labels: Bottom, Gerry Anderson, Light Fingered Fred, The Young Ones, Thunderbirds, Waiting For Godot 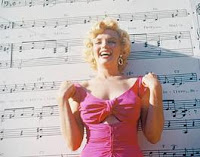 For my sins, I still take a daily paper; I don't know why, the harbingers of doom are everywhere - Europe's falling apart, David Cameron's telling everyone he can fix it and Jeremy Clarkson is setting up his own branch of Dignitas. And the trade unions are cutting up rough - again. How I long for a world where our Prime Minister smoked a pipe, Desmond Carrington was a cutting edge DJ and we all wore hats to football. A world where Marilyn Monroe and her legendary hourglass figure could stop traffic with nothing more than a smile.

Today's edition of The Times reports that a set of 3-D images of Monroe have been made public for the first time. They're going to be auctioned in Los Angeles later in the month and are expected to fetch at least £50,000. I can only imagine (and I have a very vivid imagination) how astonishing the above photograph must look in 3-D. Perhaps if the successful bidder is reading this he may grant me a private viewing. Nurse! The screens!
Posted by John Medd on Friday, December 02, 2011 1 comment:
Labels: 3-D, Marilyn Monroe

Powers to the people 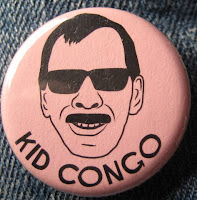 Last week saw me bombing down to south London for the only UK gig by Kid Congo and The Pink Monkey Birds as part of their latest European tour. Playing underneath the arches at The Elephant and Castle, a more low key gig you'd struggle to find.

With an impressive CV including tenures with The Gun Club, The Cramps and The Bad Seeds, Kid Congo Powers is the go to guy if you like your guitar playing to tick psychobilly, punky blues, even jangly boxes. But Powers isn't a box ticker. His sweeping cinematic style, particularly on the band's many soaring instrumentals are a cross between Ennio Morricone and Link Wray. Thus his widescreen sound is layered, hypnotic and, above all, toe tapping.

He even mans his own 'merch stand'. How refreshing to meet a rockstar whose ego doesn't enter the room a full ten minutes before them.