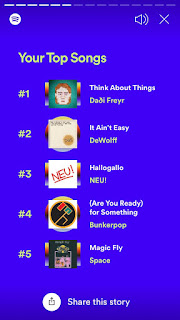 I'm guessing a few people are sharing these right now: if you have a Spotify account then it's that time of year when they tell you what you've been listening to during the last 12 months (a lockdown special, you could say). And they really do crunch the numbers and drill down into the stats. It's quite anoraky so I'll cut to the headlines.

It would appear that these are the five tunes that have helped provide my musical life support in 2020. You'll find the backstory to most of them I'm sure in the small print of my various back issues. Except maybe this one: it came out at the height of punk and despite my new wave leanings at the time I absolutely adored it.  And still do, obviously, as it made #5 in this highly bespoke/made to measure chart.

Space were French and this, their debut single, came out on the Pye label in that highly distinctive pink bag of theirs. And that, truth be known, just about sums up everything I know about this early slice of electronica. Imagine Daft Punk with keytars.

They say every man should have a hobby; I'm not sure if this counts, but my pet project over the last few weeks has been photographing the beech tree outside my front door; from the same vantage point and at (roughly) the same time of day. I put the first few in a collage, the rest have been posted on my Twitter feed. At some point someone will have to politely tap me on the shoulder and say "'Enough with the tree already, John." But until such time as the pubs and caffs reopen again it's kind of all I've got right now. 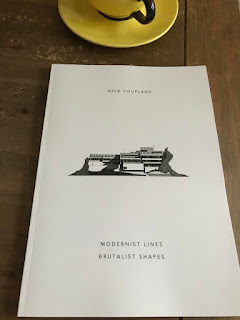 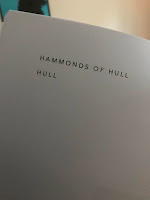 On Christmas Eve many years ago my heavily pregnant mother fell down a flight of stairs in a Hull department store. Although she probably jingled all the way, nothing was broken; not there and then anyway - however her waters did break four days later and, instead of being a January baby, I decided to make my way kicking and screaming into this world on December 28th.
The department store in question - Hammonds of Hull - has been lovingly recreated by artist and illustrator Nick Coupland in his new collection Modernist Lines, Brutalist Shapes. As you can see, the staircase which led to my 'early doors' all those years ago has been evoked perfectly in his pen and ink drawing. 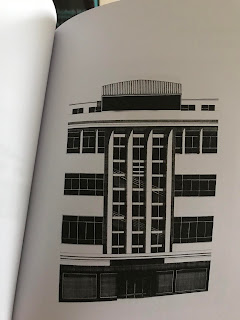 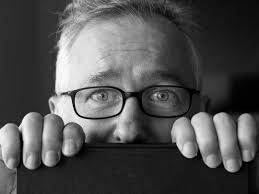 * Er, no: it's actually 18 months. And a huge thank you to Georgina Wilding for helping to lay on such a lavish festival in what has been a challenging year to say the least.
Posted by John Medd on Friday, November 27, 2020 6 comments:
Labels: Georgina Wilding, Henry Normal, Nottingham, Nottingham Poetry Festival 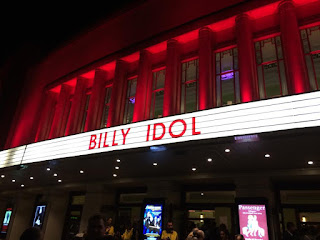