One song to the tune of another 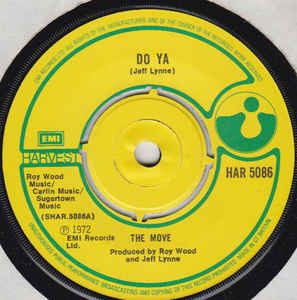 When Jeff Lynne wrote the rather catchy Do Ya for the Move they (unwisely, IMHO) stuck it on the B side of their 1972 single California Man. And there it would have stayed if it hadn't been for one Todd Rundgren. In 1975 Rundgren and his pick-up band Utopia were dropping it in their live set and everyone, seemingly, thought it was one of theirs. Well they would, wouldn't they? It sounds like a Todd Rundgren song.

So when the perma-shaded Lynne - by now fronting the Electric Light orchestra - got wind of this he must have said to himself 'Fuck that for a game of soldiers' and promptly rerecorded it for the next ELO album. A New World Record released in 1976 went on to shift five million copies in its first year of release alone; thanks, obviously, to the inclusion of Do Ya.

And, yes, its striking resemblance to the Sweet's Fox on the Run hasn't gone unnoticed. The harmonies, in particular, have been lifted wholesale. I can only think that Jeff Lynne must have been feeling quite magnanimous about the whole thing and didn't bother filing a lawsuit; cushioned as he was, probably, by his millions in the bank. 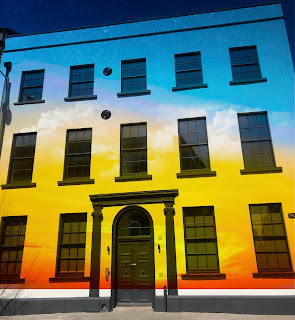 It's only taken me the best part of five months, but I bought a 2021 pocket diary today. That's cuz I've got stuff to put in it. I know, scary isn't it? As my mother-in-law used to say - 'There never were such times.' Meet ups with friends & family; a few days away; my second jab. It's all too much. I've always said I should get out more. Well, now I am.

As you can imagine I was feeling quite giddy earlier. So giddy in fact that I bought a camera on eBay. Some of my photography buddies on Twitter are getting together soon so I thought I'd be reckless. I've been more than happy with my point and shoot Box Brownie (and, of course, my phone) but thought it was high time I acquired a big boy's camera. I used to lug an old 35mm Praktica around with me when I was in my twenties. I'd take it everywhere (gigs, especially), but I dropped it once too often - on a trip to France I think - and can remember throwing it off a boat.

Talking of France (and gigs), my new favourite band have just released their second album. Les Grys-Grys, from Montpellier, are one of the most explosive bands I've heard in a long, long time. They make my pulse race (probably not a good thing when you're my age) and I can't wait till it's safe enough for them to come to the UK. I've already given notice that I'll be following them round the country when they do. I'll probably have a bus pass by then; but at least I'll be getting out more. 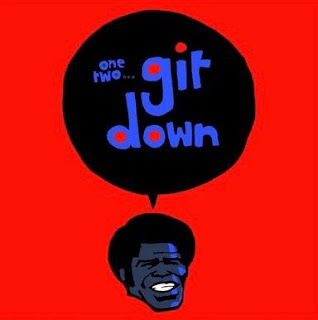 I gave an armful of blood this morning. No biggie - it's something I've been doing since I moved to Nottingham (the first time) in 1986. However, what did make it a big deal today was me breaking every rule in the book (well, one anyway); walking home in the early afternoon sunshine I happened upon one of my favourite pubs with a few tables laid out on the sunny side of the street. Let me tell you, never has a pint of beer tasted so good. (Quitting while I was ahead, I hastily cancelled my afternoon plans to operate heavy machinery.)

Don't get me wrong, I love a good cover version; you'll find them strewn all over the place if you go thru my back issues. Mashups too - loads of 'em. However, IMHO, I think the most sincere form of musical flattery is the good old fashioned sample. A knowing nod or a tip of the hat to a tune - or tunes - that tell the listener where you're coming from.

My current sample of choice comes courtesy of a blinding tune James Brown released on his 1973 album Black Caesar. I first came across it when it appeared on the score to Lock Stock and Two Smoking Barrels. A great British caper movie and soundtrack to boot. But before the sample, have a listen to the source material:

The horns really do make it don't they? The JB's (for it is they) were Brown's backing band for much of the 70s and 80s. Their alumni is quite something; players like Bobby Byrd and Bootsy Collins have at sometime in their lives been a part of James Brown's Revue.

So, this sample that's been floating my boat; well, it's not the Ice T lift that formed the backbone of his 1990 single You Played Yourself. Likewise, neither is it Nas' Get Down from 2002 - ploughing a similar furrow, as it does, to Ice T (albeit with more effin' & jeffin').

No, the one that does it for me is Pete Rock's instrumental 'The Boss' which not only borrowed James Brown's riffs, but also deploys some clever (& sampled) jazz piano loops played (backwards!) throughout. See what you think.


Something I read on Amy Rigby's intoxicating blog the other day really resonated with me. Long story short she said that even though blogging may well be seen by many as outdated, tired or not on trend "I'm just gonna keep chugging along like an old man's dinghy in a stream of slick, shiny yachts." In other words, and I've said this here many, many times - I'm writing this stuff for me, essentially. If others a. find it and b. heaven forbid, like it, that's nice but not why I do it.

I went to see Dad on Monday. Since restrictions began to ease I've gone over to Grantham a couple of times now for lunch. We generally walk to the park and have a coffee and a sandwich. And a side order of chips; food tastes better sitting on a park bench I tend to find.

Wyndham Park is a very well kempt park and also near to the grammar school I used to attend when I was not long out of short trousers. I asked dad if he wouldn't mind indulging me while I had a nosey through the railings. It's nearly 50 years since I started my first term at King's. A time when masters still wore gowns and mortar boards and thought nothing of a bit of light corporal punishment to while away the time. Luckily in 1972 there'd been a new intake of staff (teachers, not masters) who wore civvies and were actually decent human beings. Mr Roper, our Geography teacher and form teacher, being one of them. Along with a couple of other good eggs he was probably not long out of teacher training college when he came to the school and, looking back, was probably only ten years or so older than us.

My nosey through the railings turned into a bit more when realising the school was closed for Easter I asked the caretaker in the security hut if I could have a look round the old quad. Fill yer boots she said. So many memories came flooding back (mostly good, but not all) as I was transported to a time when Edward Heath was PM and every single one of my exercise books was covered in pictures of the Sweet. I took a few photos and even snuck in one of my old classrooms. Finding it quite emotional I went back outside where my dad seemed to be taking just as many photos as me.

On the way back we went through the neighbouring churchyard of St Wulfram's. Our old music teacher, Mr. Lank, was the choir master and organist there. I remember he let me and my mate Phil Noon talk about Slade for ten minutes in one of his classes; the things you remember. Walking back to dad's he told me that Mr Roper's 'not so good at the moment.' When dad says someone's not so good it's usually followed by an obituary in the local paper (Dad's seen a lot of friends and colleagues in there over the years.) Anyway, that's what I did on Monday. 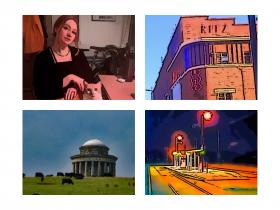 I've been putting together a fair few playlists over Lockdown (pictured above is some of the artwork). I find compiling them very therapeutic. They've gone out to all and sundry: family, friends, Twitter buddies have all been on the receiving end of these digital mixtapes; lasting no more than 60 or 70 minutes they're an ideal way to while away an hour or so. And let's face it, we've got bugger all else to do.

Often I'll get a text or maybe an email back from the recipient with a "Thanks" or a smiley emoji. However, earlier this week after sending one over to my daughter-in-law's father, I was pleasantly surprised when I got this most unique of responses (and as my reply pointed out, I look forward to receiving a similarly detailed critique for each of the other 10 tracks!)

"So, for those interested in cosmic interconnectedness, the first track is played by the Fairey Band based in Stockport so James & Janneke can probably hear them when the wind is in the right direction. Harry Mortimer was their musical director for 30 years and inspired me to play cornet in the local band. Fairey Aviation built the Swordfish aircraft in WW2 and at the end of hostilities set up Fairey Marine to build sailing dinghies. In 1959 they built the Swordfish that I'm currently repairing and hope to sail this year. It's called Sue and my sister, another Sue, was also built in 1959. It's number 215 the last they built and one of the very few that survive. If there's ever a Swordfish world championship I'd stand a good chance of a medal. Welcome to my Cosmos!"