Dark side of the Sun 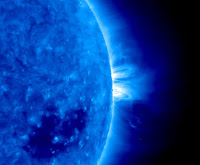 The Harbingers of Doom are back rattling their sabres again. Not that they ever went away; only now there appears to be some momentum behind the world will end in 2012 brigade. And it's entered the mainstream - kicking and screaming; if you search on Amazon you will find over 40,000 tomes predicting the destruction of Earth on December 21 2012 - that's 21.12.12 local time, 12.21.12 Eastern and Pacific.

Apparently it all goes back to the Mayan race who lived umpteen thousand years ago and, without the aid of telescopes, detected a tenth planet, beyond Pluto, lurking behind the Sun. Planet X, as we must call it (in true sci-fi style), reaches the end of some cycle or other and will reveal itself the year after next - before coming crashing down on us all on December 21 (I hope my Dad's reading this: it'll be his 77th birthday - Dad, I probably won't bother posting a card).

Don't say you haven't been warned.

Then again, when it is time for the final curtain call, I think this scenario is probably more credible: