We all like surprises; don't we? Isn't that what gets us out of bed each and every morning - the prospect of a new day and all that comes with it, everything from the planned and expected to those happenstance events that bring the most totally unexpected, and sometimes, exciting moments? It's the not knowing. If we did know what was round the corner then life would be that little bit duller, that little bit more mundane. I'm a bit sad, I know, but I won't even look at Nick Heyward's set list that somebody liberated from the stage in Birmingham the other night - I'm seeing him this Friday and don't want to know what he's gonna start and end with, or even play for an encore; of course I've got a bloody good idea, but you know what I mean? 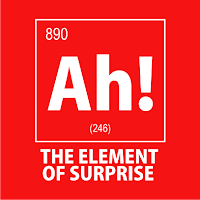 Radio presenters who herald at the top of the show what they'll be playing over the next two hours. Why? The joy of listening to the live radio, surely, is, again, not knowing what's coming next. And don't get me started on movie trailers (aka plot spoilers) - especially grating when you'll be watching the film only days later.

As they used to say on the Saturday night news, just before Match of the Day came on: "If you don't want to know the scores, look away now."