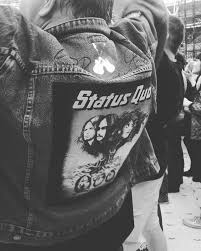 I'm not quite sure how to put this - I'm becoming ever so slightly obsessed with Status Quo. I find myself playing them most days*. Don't worry, I've not taken to wearing Quo patches or walking round with my thumbs in my belt loops; not yet, anyway.

My interest in them musically, as I said here, stopped at around 1975 but that doesn't mean I don't want to read Francis Rossi's recent autobiography I Talk Too Much or watch obscure interviews on Youtube they did on Italian TV. I'm as interested in the relationship Rossi had with Rick Parfitt, his on stage partner of 50 years standing, as I am by anything they ever recorded. Weird, isn't it?

How can anyone with a pulse not find this clip from 1970 (courtesy of Granada telly) absolutely riveting? It was the single that came to define their sound. Which is ironic as they never even wrote it. For a record that only made No.12 in the hit parade it stuck around in the charts for 17 weeks. I know, that's longer than this current lockdown. Normal service will be resumed I can assure you; I just don't know when.