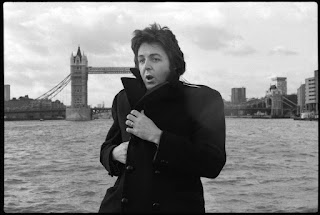 Timing is everything - boiling an egg, the 100 metre dash, buying newly released vinyl; in 1977 and most of 1978, despite being a huge Beatles fan, there was no way I'd be seen dead in a record shop asking for the new Wings album. They were tribal times: the only albums (and singles) acquired* during those heady days of punk and the subsequent new wave (and Wings were obviously as old wave as you could possibly get) were by the likes of the Buzzcocks or the Clash, 999 and the Damned: turns who would regularly feature between the covers of Sounds and/or the New Musical Express, basically. Wings were more Melody Maker, or Record Mirror.

Of course when the dust settled, and the battle lines become less blurry, it was safe to not only bring your old Emerson Lake and Palmer albums out of hiding, but you could once again walk into record emporiums, politely ask for the new, say, UFO album (other second division English rock bands are available) and not be ridiculed by the punk police.

Yet still I never went back and bought the album Macca and Wings recorded in '77 and put out the following year: London Town was released hot on the heels of Mull of Kintyre which had occupied the number one slot seemingly forever (and alienated a lot of Macca fans to boot). In fact, he and the missus, together with Denny Laine, had recorded it in the same sessions but (thankfully?) never put it on the album.

But I digress; all this preamble comes on the back of a Tweet that caught my eye earlier in the week from Eoghan Lyng at the magnificent We are Cult, who had the audacity to claim that London Town was in his Top 5 Macca post Beatles albums. Surely not I thought. Better than Flaming Pie (which didn't feature) I fired back? Oh yes, came the the reply: the exchange went something like this:


So @wearecultonline , London Town is a better album than Flaming Pie, you say? I'm to be convinced; but, like last time https://t.co/b7YvzbZ0nT , leave it with me and I'll get back to you with the scores on the doors pic.twitter.com/okK8jyuGOJ
— John Medd (@JohnMeddUK) June 25, 2018


So I said to myself I'd live with a copy of London Town for a week and see how I got on; of course, in that short time, it couldn't possibly compete with an album I'd emotionally invested so heavily in over the years: Flaming Pie, for me, was Macca's last hurrah - the last time he was truly relevant. In 1997 he came out with a set of songs that seemed to chime with the very times it was released.

But in the week that Macca came back to Liverpool (here's his visit condensed into 20 minutes) and, for once, appearing quite humble to be back in his hometown, I wasn't in the mood for a pointless slanging match. You know what, both albums stand up just fine in 2018 and Macca should be proud of both sets of work, bookended, funnily enough, by the birth of his son James and, twenty years on, the same young lad's first recorded guitar solo.

So in the end, I say to Eoghan and all at We are Cult, London Town is the perfect companion piece to Flaming Pie. And, here, to prove same I give you the two standout songs - one from each. The title  track from London Town, here, in the form of a rough and ready promo film of Mr. & Mrs. McCartney and Denny Laine cruising down the Thames eating a bag of chips.

And here's Heaven on a Sunday from Flaming Pie, twenty one years later, with James providing *that* solo.


* I really must dig out the notebook I kept at the time that details all record shop purchases from the arse end of 1974 to, I think, mid 1979. And I can assure you that from 1st. January 1977 till the day the Pistols imploded, all my purchases were coated in a fine film of gob.
Posted by John Medd on Saturday, June 30, 2018
Labels: Flaming Pie, James Corden, james mccartney, London Town, Macca, The Beatles, We Are Cult, Wings