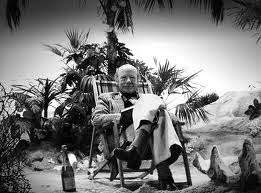 Not since Roy Plomley (right) cast Dick Clement and Ian La Frenais adrift in 1979 have two new residents washed up ashore together on the BBC's Desert Island.

It was only to be expected that Anthony McPartlin and Declan Donnelley would be a twofer when Kirsty Young chucked her next victims overboard. I like Ant and Dec. What's not to like? A few years ago they were asked to make a tribute to The Likely Lads; it was written by Clement and La Frenais and I thought they made a decent fist of it. And Rodney Bewes makes a cameo appearance as the newspaper vendor.