Remember Land of the Giants, that mysterious planet where everything was 12 times larger than its counterpart on earth? Morgan Howell's paintings may not be quite that big but his jaw-dropping 3-D reproductions of classic singles, c/w their often creased and torn paper sleeves, measure 27" x 27" - thus living up to their tag of SuperSizeArt. His work is much in demand and is frequently commissioned by the great and good who all want one of Howell's incredible creations hanging on their wall.

I managed to tear Morgan away from his paintbrushes long enough for a mild interrogation:

What was the first single you bought?

I wish I could say it was Bowie, or Lou Reed. But it was Alvin Stardust and Tell Me Why from 1974. I used to draw him with his sideburns, black outfit and gloved hand holding the mic at a seemingly impossible angle.

What makes you want to paint a particular record – is it the record itself, the writing on the label or the sleeve?

I have a list that I’m working through, though occasionally I do get interrupted by a commission, or a request for a show piece. This has happened recently with Agnetha from Abba and The Eagles.

Looking at some of the stuff you've painted, it's the 'distressed' sleeves with rips and tears that really capture a record; they're the ones that were taken to parties and had beer spilt on them. Did you look after your vinyl as a kid?


I wouldn’t have given much thought with the 45s, as long as they played. I was more careful with albums and eventually got record boxes so I could take stuff to parties. Now of course I love the wear and tear. The objects themselves have gotten old and worn like us and more interesting for it.

Ever been tempted to work through a label's entire back catalogue (turkeys and all) – say Stiff Records for instance? (starting with BUY-1 The Damned's New Rose).

No, though many people have asked if I’d paint New Rose. So you’re a Damned fan eh?

I see you do boys annuals now. Where else do you see Supersize going? Classic paperbacks? Postage stamps? Dollar bills?

(Personally, I'd love to see Morgan have a stab at some of these)

How long do they take to paint? Longer than it takes the band to write and record the record you're recreating?

They usually take a couple of weeks depending on the complexity. The Beatles 'Apple' 45s took longer as I had to paint the cracked black lacquered sleeves and it took a while to get that right. Dancing Queen needed to be ready for Agnetha in under a week.

I've always liked the RCA bags, have you got a favourite design? I love the orange and green one.

My current favourite is 'You Never Can Tell' on Pye International. A fabulously evocative design with the stamped R&B motif in the right hand corner of the bag. And one of Chuck Berry’s finest to boot.

Fade out or proper ending? Proper ending. The ballad of John and Yoko and Teenage Kicks being two great examples.

And, finally, which one of your paintings are you most proud of? 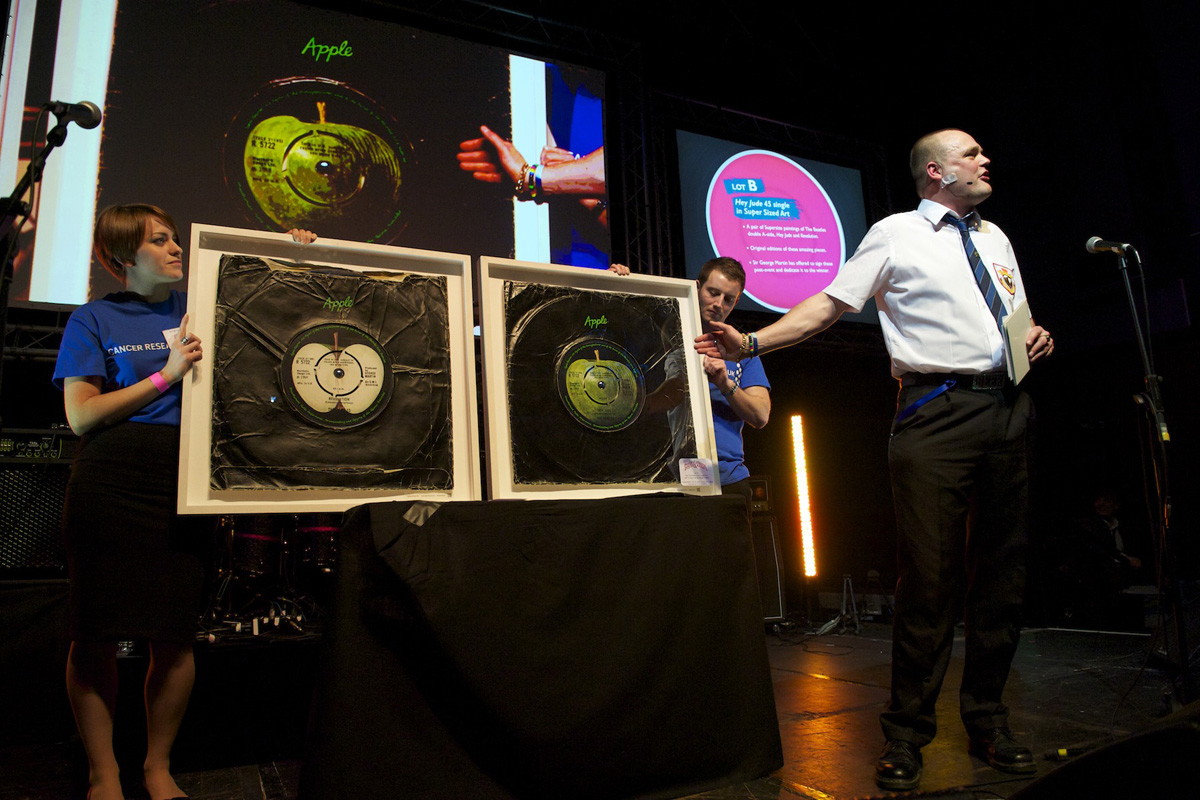 Probably most proud of Hey Jude/Revolution on Apple as I gave them to Cancer Research and they were auctioned at Abbey Road by Al Murray and made a fortune. I was stunned and a career was born.