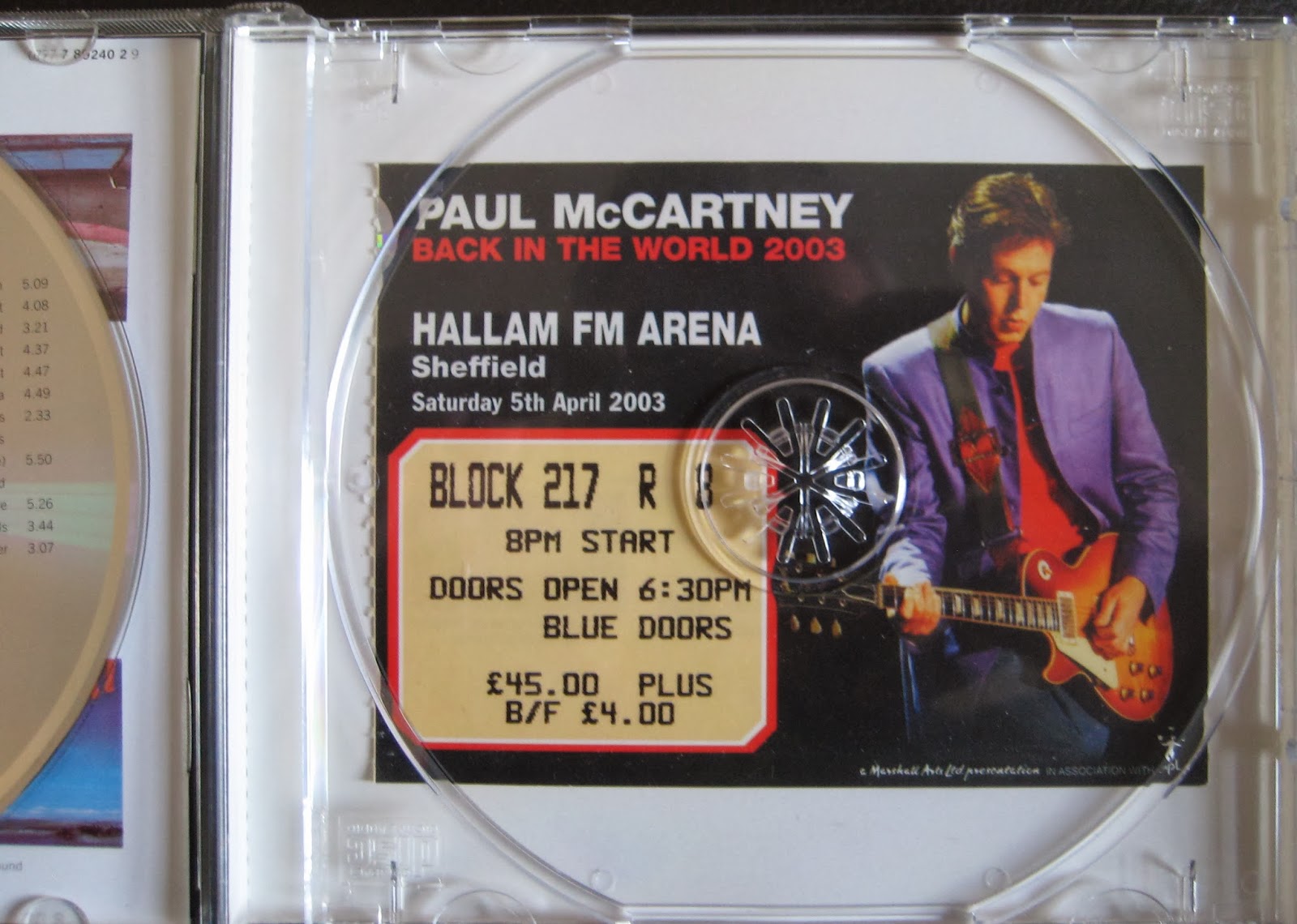 I have huge respect for David Hepworth: a fine writer and broadcaster who, to paraphrase Danny Baker, 'always hits the n on the h.' I found this 2009 Blog of his the other day and thought I'd lift the idea wholesale - and come up with my own 50 odd gigs that are memorable for all sorts of reasons. I hope he doesn't mind.

1. Lindisfarne - Newark Palace Theatre, January 1975. My first gig. Riggsby's mum took us. I couldn't believe how loud it was.
2. The Who - Charlton Athletic Football Club, 1976. Forget what I said about Lindisfarne. This was loud. The Guinness Book of Records said so.
3. The Stranglers - Leicester De Montfort 1977. Jean Jacques Burnel came on stage during Steel Pulse's set (who were being all but bottled) and said 'If you don't show them some respect, we're not coming on.'
4. Generation X - West Runton Pavilion, December 1978. It was Riggsby's 18th. After 35 years I finally wrote up my gig review.
5. Red Hot Chili Peppers - San Diego, 2000. They were plugging Californication. In California.
6. Rocket From The Crypt - King Tut's Wah Wah Hut. This band are so good live we recently flew to Barcelona to catch one of their 'one off' reunion gigs. The Glasgow show was ineffable.
7. Nick Lowe - Jazz Café Camden, 1995. This was where he reinvented himself.
8. Joe Strummer - Princess Charlotte, Leicester. Can't have been long before he died. He organised the crowd so all the short arses came down the front and those of taller persuasion stood at the back.
9. Stephane Grappelli - Mansfield Leisure Centre. Can't remember the year but I remember shaking his hand.
10. The Black Crowes - The Garage, Highbury Corner. More bands should do this - they played an acoustic Saturday afternoon matinee ahead of their evening plugged-in show.
11. Paul McCartney - Sheffield. The Number One Son's heart nearly stopped when they lit the Live and Let Die fireworks.
12. The Buzzcocks - Retford Porterhouse, 1977. I'd bought their first album that afternoon: I was ready for them.
13. Joe Jackson - Hammersmith Odeon, 1989. Jenny was pregnant and Joe played his new record, Blaze of Glory, in its entirety.
14. Shack - Nottingham, 2004. They kept it together that night. Greatness always alluded them; probably because they didn't always keep it together.
15. Grover Washington Jr - Concord Jazz Festival, CA., 1998. Smooth. Hot.
16. The Monkees - Royal Concert Hall, Nottingham. No wooly hats but the other three were there.
17. ZZ Top - Marquee, 1983. I stood next to Gary Bushell and Pete Way.
18. Chuck Berry - Ice Stadium, Nottingham, 1991. Late on stage due to haggling with promoter for money.
19. World Party - Wolverhampton Civic. Karl Wallanger unveiled She's The One. It was also the night he probably sacked his guitar roadie.
20. Trippin' Over Wah - British Legion, West Bridgford, Nottingham, 2004. Ten years later and it's still one of the liveliest debut gigs by a band I've ever seen: the Police were called three times.
21. The Sweet - Rock City, Nottingham, 1981. The guitarist had a pint of beer thrown at him. Refused to come back on.
22. The Bees - Rock City, Nottingham, 2005. The guitarist had a pint of beer thrown at him. Refused to come back on. Déjà vu.
23. The Wilsons - Saltburn, 2013. Sting likes them now, apparently.
24. Martin Taylor - I've seen him so many times it's hard to pick one out; I'll go for Rolls Royce Social Club, Derby - we sat on a comfy sofa while Martin played just feet away from us.
25. Aimee Mann - Nottingham. Jet lagged and slightly tetchy she forgot the opening line to one of her songs. But when someone in the audience shouted the prompt she transformed herself.
26. The Next Band and Def Leppard - Grantham Guildhall, 1978. Def Leppard were good. The Next Band were better.
27. Long John Baldry - Astoria, Nottingham. He had Dick Morrissey and Jim Mullen in his band that night - they did a fabulous Morrissey Mullen set.
28. Rod Stewart - Nottingham Arena. Forty years since he and Baldry were tearing it up with Steampacket but Rod still knew how to do it.
29. The Cramps - Rock City, Nottingham. Uncomfortable viewing - Lux Interior climbed speaker cabinets and self harmed all night.
30. Arthur Lee and Love - Rescue Rooms, Nottingham. They played all Forever Changes.
31. Rory Gallagher - Nottingham, 1989.  We left after three and a half hours and he was still playing.
32. The Jam - Derby King's Hall, 1977. I remember Paul Weller being angry. No change there then.
33. Neil Innes - York, Fibbers. I love it when he Rutles.
34. Loudon Wainwright - Newark. A great evening spoilt only by Martha.
35. Ian Dury & The Blockheads - Northampton Roadmenders. He was dying. He was helped on stage by Derek The Draw. He was sublime.
36. Bellowhead - Nottingham, seven or eight years ago. When I first began to notice people talking, loudly, during gigs.
37. Field Music - Leeds Cockpit, 2012. Field Music were on form; the audience were not - the talking throughout drowned out the band. We walked out.
38. Wreckless Eric and Amy Rigby - The Milton Rooms, Malton, 2012. Still railing.

39. The Boomtown Rats - Derby, 1977. We went backstage afterwards and got their autographs. Well I was only 16. Bob and the band signed my ticket.
40. Tony Bennett - Nottingham. Proved during one number he didn't need a microphone.
41. Eddie and The Hot Rods/Squeeze/Radio Stars - Leicester De Montfort, 1977. Jools Holland tried to play the concert organ.
42. Richard Thompson - a pub, the name of which escapes me, in Nottingham, 1986. Just him and his guitar fighting to be heard over the tills.
43. Girl - Marquee, Wardour Street W1, 1980. I saw them plenty around this time - they'd got a residency at Soho's finest music club.
44. Clive Gregson & Christine Collister - The Narrowboat, Nottingham, 1987. Gregson & Collister split. The Narrowboat was razed.
45. The Bootleg Beatles - numerous. Too young to see the real thing, I've filled my boots (as it were) many times - Hucknall Leisure Centre and The Pigalle Club in Piccadilly spring to mind.
46. Dodgy - Exeter Big Top, 1997. The Number One Son's first gig.
47. James Yorkston - Nottingham Bodega. The most respectful audience I've ever seen. Anywhere.
48. The Slackers - Nottingham. Picking up where The Skatalites left off.
49. Jah Wobble - The Maze, Nottingham. He turned his bass up to 11.
50. Pete Morton - The Sun, Pickering, 2014. When we sing together, that's the best of all.
Posted by John Medd on Tuesday, January 21, 2014
Labels: Chuck Berry, David Hepworth, Def Leppard, Disco Dan, James Medd, Macca, Nick Lowe, Riggsby, Shack, The Boomtown Rats, The Bootleg Beatles, The Next Band, The Who, Trippin' Over Wah