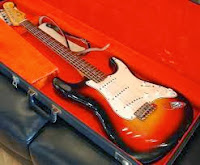 Bob Dylan has clocked up over 2500 gigs on his Never Ending Tour; a tour that began way back in 1988 and has since straddled the globe many times over. And for over 90 percent of those dates, night after night, he's been centre stage with a guitar strapped over his shoulder. He didn't always play it - for the most part it was just a prop. A symbol that became synonymous with seeing Dylan live. It was his sheriff's badge. All great entertainers have used props: Tommy Cooper had a fez, Eric had Ernie, Rod Stewart's got a mic stand, Mick has Keith - you get the picture.

So, these days, when Dylan hides at the side of the stage behind a piano you sort of feel short changed. It doesn't look right. That he continually rearranges his songs is a given; singing along with Dylan will never become an Olympic event. But seeing him without a guitar just isn't right. The one time song and dance man isn't dancing anymore.
Posted by John Medd on Thursday, January 02, 2014
Labels: Bob, Bob Dylan, Never Ending Tour