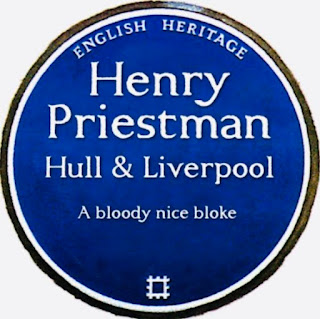 Back in May of this year I was singing the praises of ex-Christians and It's Immaterial songwriter and multi-instrumentalist Henry Priestman, whilst at the same time - probably a tad unfairly - bestowing upon him the accolade of Unsung Hero. As you can see, Henry embraced the term (at least I think he did) and after writing about him again here (and bracketing him with Harry Nilsson no less) I approached him about doing something on my blog. The warm email exchanges that followed were, at every turn, reminiscent - I think anyway, and I'm sure Henry would agree - of two old boys who'd known each other all their lives; though we've never met - maybe that will change as soon as this bloody pandemic buggers off. I hope so.

So I asked Henry to tell his musical story up to the point where he met the Christian brothers. I've always thought that the best tales always happen before the main story.

"I was brought up on a 60s diet of Beatles/Kinks/Tamla/Stones etc, then moving on to psychedelia, then 'underground' or 'progressive' (as it was called in those days) in tandem with Bowie and Roxy. My abiding passion as a teenager was just music music music, and all I ever wanted to do in my life was play in a band. I attended Hull Art College in 1974 for a one year Foundation Course, having failed miserably in my 'A' levels(except Art), and, of course, bands form at Art Colleges (well, they did back then), so it was the obvious path for me.

Towards the end of my time at Hull I formed a band featuring John 'Brad' Bradbury on drums (who later popped up in the Specials), and future Yachts guitarist Martin Watson on guitar (with whom I would end up going to Liverpool Art College after the summer). We rehearsed for weeks and played the end of summer term party, supporting a chap from the main college called Eric Goulden (aka Alan Addis), whose band went under the marvellous moniker Addis and the Fliptops (featuring the Binettes). Two years later (Wreckless) Eric and I would both be signed to Stiff records.

Liverpool was actually my second choice for the three year Diploma Course; I applied to Leeds Art College, but failed the interview. Interestingly enough, if I had got into Leeds, I’d have been on the same Fine Art Course (and same year) as Marc Almond & Dave Ball of Soft Cell. It could’ve been all so different! So Martin and I both headed to Liverpool with ideas of forming a band. What sort of band we weren’t sure, and had no thoughts of actually writing our own material. We were lucky, punk came in (meaning you only had to be vaguely proficient on your instrument...ideal for me!): songs became shorter, less than three minutes, but full of 'honesty and energy' (as my later song 'Did I Fight in the Punk Wars for This?' stated). We formed the typical Art College band, somebody suggested we write our own songs and two years later fortune smiled upon us as we (now called Yachts) released our first single 'Suffice to Say'. With Yachts we had a good run for our money: a couple of albums (even scraping into the Billboard charts), toured the States twice, toured Europe supporting the Who...but all bands reach their sell-by date at some point - even if they don’t split up.

It was whilst in Yachts that I formed a hobby band with Yachts’ original singer John Campbell called It’s Immaterial - we’d find obscure songs by American garage/punk/psych bands (like the ones that would appear on Lenny Kaye’s wonderful Nuggets compilation, but even more obscure...so people might think we’d written them!), and just play for fun round Liverpool. I was away in the States touring with Yachts, and when I returned John and Jarvis from Itsy had come up with this idea for a song 'A Gigantic Raft in the Philippines'. Suddenly my hobby band was doing more interesting stuff than my main band, so I made the decision to leave Yachts and do It’s Immaterial full time. The only thing was that I was no longer a writer in the band (I’d been the main writer in Yachts), which started off fine; it was nice not to be having to come up with an album’s worth of tunes every year, and I became the sort of Brian Jones of the band - instrument-wise I’m jack-of-all-trade (master of absolutely NONE), playing a bit of keys/guitar/clarinet/sax/marimba/cello etc etc. This was fun for a while, but I was starting to come up with ideas for songs, and realising I probably wouldn’t get them away with Itsy, I stashed them, and began thinking about whom I could get to sing them. It’s Immaterial were working on a song (that became a single) called 'Ed’s Funky Diner', and we’d heard of this a cappella band of brothers who would be ideal for singing on the chorus of this new song. I was working at that time as an engineer in a demo studio that belonged to Itsy’s manager Pete Fulwell, and the brothers Christian were booked in to add their vocals to the track. I was the only member of Itsy at this session, and when the session ended, I plucked up courage to ask “would you like to hear some of my songs?” Two of them had a game of tennis booked, and didn’t really appear interested, but the three brothers Garry, Russell & Roger  all stayed to hear my demos and we began working together on songs that would end up on the Christians' eponymous triple platinum debut album. You could say that was a fortuitous meeting, and I’m glad I asked them to listen to my songs!"

And so to the second part of me quizzing Henry. Could he, I asked him, tell me in 200 words who his favourite band/artist is? Of course he could!

"I go through phases, last month it might’ve been Roy Harper, the month before that Belle & Sebastian; it changes, but currently, having just finished Johnny Rogan’s Ray Davies biography, I’m into all things Kinks - which is sort of where I came in. My friend and neighbour, John Lewis, his dad ran the Hedon Bakery, and John had all the latest singles, so it was a case of free cakes & Vimto, and afternoons listening to his amazing record collection -  Beatles, Byrds, Pretty Things, Stones and THE KINKS. Mum liked the Beatles (she’d bought me 'From Me To You' for my 7th birthday) tolerated The Stones, but couldn’t STAND The Kinks, which of course made me like them even more! And then I found out that me and Ray share the same birthday! So, having saved up my meagre pocket money, my next step was to buy my first album (with my own money). The Marble Arch label came to the rescue: for twelve & six you could buy 'Well Respected Kinks', it had all the classic early singles on, and the B sides were fabulous too. I was hooked. I’m currently trying to buy up all the Kinks LPs I sold in my ill-advised LP cull of 2010. They’re not cheap; lend us £50, would you, John?"

A huge thank you to Henry who as well as being a perpetually busy man - writing and recording - was also in the middle of selling his house when writing this for me.
Posted by John Medd on Friday, August 21, 2020
Labels: Be-Bop Friday, Henry Priestman, The Christians, The Kinks