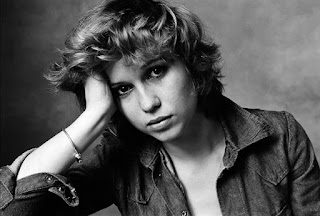 A recurring theme of late on this blog - maybe Covid and the general state of the world (and my head) has something to do with it* - is time; as in where does the time go? One minute I'm reaching for the stars, the next I actually make an audible noise when I reach for the salt**. And what really brings it all into sharp focus is photographs. Finding photographs of ourselves as we used to look; maybe some of us are still clinging on to the misguided notion that we still do look like our younger selves. Young. Carefree. And the world at our feet.

When someone on Twitter recently posted a photograph of the stunningly beautiful Susan Penhaligon taken in 1974, it was Ms. Penhaligon herself who came back with the following two word response: "Good Heavens!" Thinking about it, what other possible two word response could there possibly have been?


* It's certainly fucking up my sleep patterns, that's for sure.
** I don't actually partake of salt, it was a merely a way of demonstrating the onset of my impending decline!
Posted by John Medd on Thursday, August 20, 2020
Labels: 1974, Susan Penhaligon, The Connells