You Just Put Your Lips Together and Blow 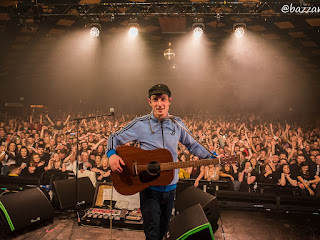 There's a kid* from Scotland who is getting very much under my skin at the moment; in a good way, I hasten to add. I shan't go into the whys and wherefores as to how Gerry Cinnamon appeared on my radar, but his 2017 debut album Erratic Cinematic has been on constant rotation at Medd Towers for the last two weeks straight.
Cinnamon's lyrics, sung in his native Glaswegian, combine a toxic tenement past with hope for a better (independent?) future. All backed by his rudimentary acoustic guitar and a couple of loop pedals. Oh, and whistling. A whole heap of whistling. Not since the halcyon days of Roger Whittaker has there been so much whistling on one album. But it's OK, it works. Give it a a spin; give a little whistle.