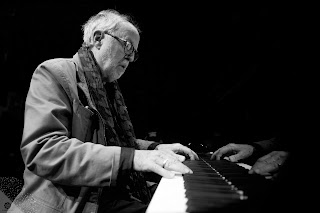 As lists go, it's pretty short. As lists go, it's also very niche; in fact, as lists go it probably can't even be described as a list. Let me explain. The list to which I refer is headed up "Smooth Jazz Keyboard Players I Need to See Live Before I/They Die". The 'list' used to have two names on it: Joe Sample. And Bob James. But as Joe Sample bowed out in September 2014, the list (hell, it doesn't even warrant a scrap of notepaper in my wallet) now bears but one name.
So imagine my delight when I saw that Robert McElhiney James was playing a two night residency at London's Pizza Express on December 1st & 2nd (a couple of weeks before the maestro's 80th birthday - on Christmas Day). So far so smooth. However, such is the interest in the man who's best known for this, it's SOLD OUT! Bloody lists.

I don't know what tunes he'll be playing to the Soho pizza eating fraternity next month, but if I was in the room I'd be baying for these two, that much I do know.