And the Sun was a demon 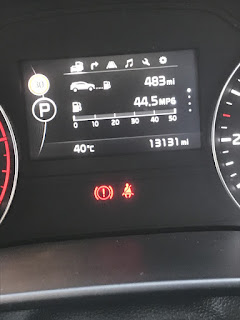 I think it's safe to say that yesterday was a little on the warm side. James came up with Janneke to see his poorly mother; convalescing in temperatures akin to Hades is no fun, but seeing the Number One Son and his bride was a tonic far surpassing that of any of the morphine based knockout drugs Jenny was prescribed when she left the hospital last Saturday.

I took this photo in my car yesterday afternoon just after 4.30pm. 40 degrees. I tell you what, the Sun didn't feel like it was 93 million miles away. I'm sure it slipped anchor at lunchtime while nobody was looking.

Below is my favourite Sun TV/film clip, bar none. It's from Thunderbirds and is the one where Alan Tracy is stuck on the bridge with his grandma in temperatures similar to those we were experiencing in the East Midlands.

If you fast forward to 2:17 you'll see real beads of perspiration running down Alan's wooden puppet head. That was me yesterday.