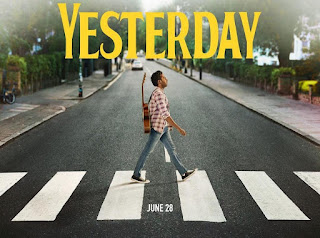 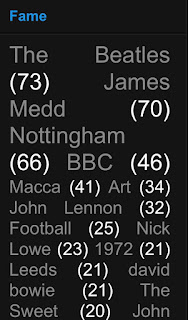 Went to see the much hyped Yesterday yesterday. Being something of a Beatles nut (clock the number of Beatles and Lennon & McCartney posts on this blog [left]), I thought it would be massively churlish of me if I didn't scribble a few words about it here.
I'm usually pretty quick out of the traps when it comes to rating and ranking new movies, but this is a little bit different - I'm still processing it, would you believe; a fantastical plot (a world without the Beatles - really?) with seemingly more holes than a used dartboard, peppered with more than a few comedy cul-de-sacs and incorporating a typically lame Richard Curtis crow-barred rom-com. And yet, and yet...

That soundtrack; those songs. For all its faults, and there are many, it's the music, ultimately, that carries this film over the line. Himesh Patel who plays struggling singer-songwriter Jack Malik, has been gifted the most fantastic set of songs served on a silver platter and ready to be devoured. And they are, for the most part, played brilliantly.


Patel is not just a talented actor but he can play a bit too. That means there's no awkward miming or contrived camera angles to disguise the fact that a non musical actor is holding a strange instrument around his neck and doesn't know what a chord is, let alone know where they can be found on the neck of a guitar.

Apart from Malek's performance (and the Beatles music, obvs) I took three positives away from the film:

Lily James - who played the love interest with just the right amount of girl next doorness.

Ed Sheeran - just a good egg. The ginger superstar was quite happy to sit on the subs bench for much of the movie, but was given some great lines nonetheless.

The best gag in the film - when Jack Malik realises, after an internet search, that his friends really aren't winding him up when they tell him they don't know who the Beatles are, he then Googles Oasis - nothing but a clutch of exotic holiday websites. "That figures" he says.
Posted by John Medd on Sunday, July 07, 2019
Labels: Danny Boyle, Himesh Patel, John Lennon, Lily James, Macca, Oasis, The Beatles, Yesterday