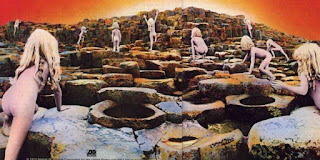 Thanks to Peter Grant, their thug in a suit manager, Led Zeppelin never released singles in the UK; he thought it was beneath them. Not so in the States, however; Grant wasn't quite so precious about what his charges released over there by way of 45 RPMs. Their seventh single on the Atlantic label was a delicious slice of cod reggae with John Bonham's drums very much to the fore. I think the reason I like it so much is because their po-faced bass player, John Paul Jones, said publicly, many times, that he hated it; hated the song, particularly hated the title. Get over yerself Jones.

It only made No. 20 on the Billboard charts, unlike the album from which it was lifted. 'Houses of the Holy'. which sat at No. 1 for weeks on end.
Posted by John Medd on Tuesday, July 16, 2019
Labels: 1973, Atlantic Records, D'yer Mak'er, Houses of the Holy, Led Zeppelin, Peter Grant