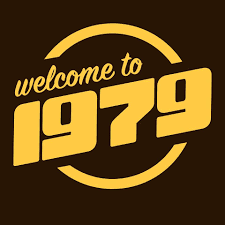 It's long been acknowledged, between me and Steve anyway, that the 70s actually started in 1968 and probably kept going till around mid-1983. Culturally, musically definitely, and sportingly - mavericks ruled the world in concert halls and football grounds the world over. So when you talk about 1979 be under no illusion that the 1970s still had plenty of gas left in its tank.

Some stonking albums came out in '79. I particularly remember buying Joe Jackson's Look Sharp, Valley of the Dolls by Generation X (produced by Ian Hunter), this classic by Graham Parker and The Damned's Machine Gun Etiquette. It was also the year In Through the Out Door - Led Zeppelin's swan song was released, and the Clash's eclectic mixed bag, London Calling.

Tom Petty was busy too. Together with his band the Heartbreakers, he released Damn the Torpedoes the day before his 29th birthday. And if you were to press me for one song from today's featured year (go on, press me) I reckon it would have to be this: