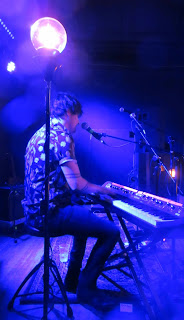 It was something of a Northern Irish showcase last night at the Bodega in Nottingham. Portaferry boy Ryan McMullan, top of the bill, supported by Travis is a Tourist (Belfast) and Stephen McCartney (Bangor).

Playing to a packed house, the three lads all put in stunning sets and were all visibly moved by the warm reception they received: if they like you at the Bodega they really do show it.


There will be a longer piece on all three of them in the next week or two, but, as a taster, I just want to share this song with you: Holding Me Down by Ryan McMullan has been playing in the car all week, and he wound up his set with it last night before rushing to the back of the room to man his own merch stand.

After signing a couple of CDs for me he described how fast things were happening for him (he really is gaining traction in Europe) and how well the recent German and Dutch gigs had gone. Nottingham was the first night of the UK and Ireland leg of the tour - they then go all over the place, finishing up in Cork, on October 15; I haven't ruled out a quick dash over the Irish Sea for that one. Yes, he is that good.


Ryan McMullan - Holding Me Down