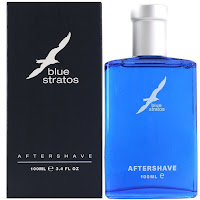 In the mid 90s, when Loungecore had its day in the sun, I didn't need poking with a pointed stick to make me clean out my parents' record collection. Or pay silly money for lounge compilations (back when CDs were still selling for an eye watering RRP of £16.99) full of Tony Hatch*, Alyn Ainsworth and the Harry Roche Constellation: I sort of loved this stuff anyway. So when clubs like Blow Up and Fabric were having Lounge nights and hipsters (not the hipsters we know today) were crate digging for the easiest of easy listening long-players, I didn't have to listen to this stuff ironically anymore. I could just listen to it.


But how does it work with men's fragrances - I'm talking 1970s aftershaves here? I remember writing that when I was seventeen I thought Blue Stratos was the last word in men's toiletries. At a time when men's grooming comprised soap on a rope and low budget splash-ons - Brut, Denim, Hai Karate, Old Spice, Tabac et al - it was only Blue Stratos that warranted repeat usage. Once you took away the aroma of stale fags and beer from most pubs back in the seventies and early eighties, the only smell left in the room (apart from BO) would have been a couple of wide boys at the bar who'd spent all their disposable income drowning themselves in Brut 33.


So I recently spotted online that you can still buy Blue Stratos. Whether or not it went away and has now come back, or just never went away in the fist place is anyone's guess. Anyway, I had to investigate: would it come in the same distinctive blue bottle? Yes it does. Would I still get that same frisson when I unscrewed the top? Er, no, not really. And, more importantly, would it still smell the same, a smell that would take me back to a time and place? Mmm, sort of. (Or would it smell like an industrial household cleaning product?). And, even if it did smell the same, would I be able to wear it? And by that, I of course mean would I be able to wear it for real, or would it just be an ironic gesture gently reminding me that a much younger version of me would wear this scent in the feint hope of pulling fair maidens who, like me, knew no better? I'll get back to you on that one.

Hardly a ringing endorsement - the jury are still holed up in their hotel, they could be there quite a while yet. Without going into a laboured review of Blue Stratos 2.0 and banging on about floral top notes & musky base notes, the bottom line is that it's 'quite pleasant, actually.' And no, it doesn't smell like an industrial household cleaning product. Not on me, anyway...

* I make no apologies for digging out this Longecore classic again. Tony Hatch can do no wrong in my book.