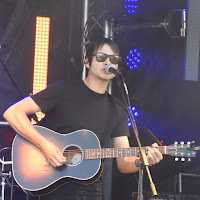 Scott Bugg, formerly of the Swines and now front man of the Vital Few, is getting loads of radio play at the moment. That's what happens when you write instantly memorable songs - it's a sure fire way to get playlisted; his younger cousin plows a similar furrow. If he doesn't get a similar lucky break then it certainly won't be for the lack of trying.

I'm hoping to catch Scott on Saturday night in town supporting the Flavells. I'll be very surprised if he doesn't play Taxman; not the only Fabs reference in this contagious new Beatle-esque song of his.