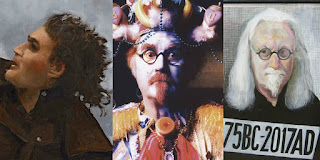 Billy Connolly will be 75 in November. As part of his upcoming birthday celebrations, three acclaimed Scottish artists were commissioned to capture the Big Yin's likeness and present Billy with their unique portraits.


BBC Scotland have made a beautiful and touching programme recording Billy's return to his native Glasgow where, through a series of his memories, archive footage and present day travelogue, Glasgow and Billy were shown very much in the here and now. Although both city and comedian have improved with age, Connolly now suffers with Parkinson's: his mind is still as sharp as a tack, but these days, during his (still impeccable) stand up shows, his once animated self is now similar to that of a 78 record playing at 33.


And the love the man generates, not just from the artists - John Byrne, Jack Vettriano and Rachel MacLean - but his audiences and the Glaswegians on the streets, is nothing short of discipleship. This sort of adoration is usually only afforded to the recently deceased.

Finally, after Billy was given his works of art, there was still one more birthday surprise in store.

Unbeknownst to BC each of the portraits had been blown up to 50 feet high and granted mural status in three locations in the city.

Watch the programme yourself to see the great man's reaction - it's up on the iPlayer until 4 September. You'll be glad you did, believe me.