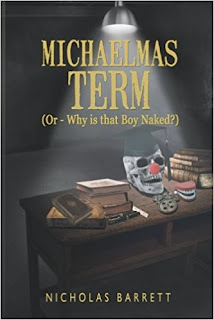 I was invited to a school reunion a couple of years back; I think I had some drying paint that needed watching that night, so I politely declined. Actually, I didn't: my email had not an ounce of politeness contained within its hastily typed two lines. Sorry Andy.

So why*, therefore, have I just ordered a new novel which, judging by the PR blurb I've been reading, is nothing more than a lid lifting exercise on my old school? (A school, can I just say, run by a sadistic, right wing, child-hating man of the cloth - ably assisted by his mortarboard & gown clad henchmen). Only the names have been changed, apparently.

*I'll tell you why. It's written by someone I haven't clapped eyes on in thirty odd years who was in the year above me at said educational establishment. Nick Barrett, sorry, Nicholas Barrett, to give the author his full title, was a good lad. I think he was on the minibus that took us to Charlton in 1976 to see the Who. To say Nick was a Who fan is like saying the Pope is a bit religious. In fact, Nick's Who connection forms one of only three things I can really remember about him. These three things being: 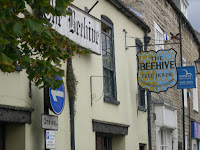 1. He always wore a full length fur coat. Keith Moon gave it to him. I know, you can't make it up can you?

2. Nick played drums in a quasi metal/punk band called Pagan. I remember Bill Peake was on bass and they would open their set with Neat Neat Neat.

Anyway, Michaelmas Term (Or - Why is that Boy Naked?) is winging its way to Medd Towers as we speak. I may have to write a follow up piece.