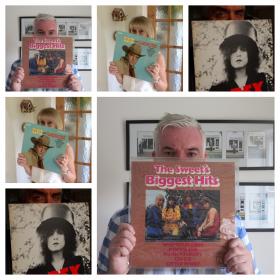 It's called 'Doing a Swede' - named after the young man who thought it would be a hoot to have your photograph taken holding the first album you ever bought with your own money; whilst at the same time doing a rudimentary version of the Dance of the Seven Veils.

Anyway, as you can see, Mr. Swede lost his cherry to Marc Bolan, I took the Sweet behind the bike sheds and Alyson, well...it would appear Alyson let Mr. Presley into her boudoir after lights out. Allegedly.

If you still have your first 33 and you don't mind sharing a Polaroid of yourself in the kitchen clutching said artefact (looking only mildly silly), then now's the time to say 'There's no time like the present' and ping the image over to Medd Towers.

I'd particularly like to hear (and see) regular (and irregular) readers' debut platters. So Mondo &Piley, C, Martin, Mark, Skirky,  Rol and anyone else out there who can still locate that first piece of black plastic they bought in 19 Seventy/Eighty, come on down.
Posted by John Medd on Friday, August 25, 2017
Labels: Elvis Presley, Marc Bolan, Swedey McSwedeface, T Rex, The Swede, The Sweet