Life after After Life 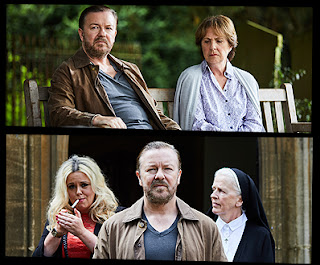 The television set that nestles in the corner of my living room - all 32''/34"/36" of it (a bit like my waist, I have no idea of its actual size) - is really nothing more than a glorified monitor (do we still call screens monitors, even?). All I know is that it's not hooked up to an aerial or dish or indeed any other other bit of sundry metalwork fixed to the side of the house.

In that respect it's been a long time since Reginald Bosanquet and News at Ten has been seen on my telly. These days I get my news feed on Twitter and, maybe, 20 minutes of Radio 4's Today programme in the morning. Evening wise I've had to knock PM on the head: Eddie Mair left behind a perfectly reliable news vehicle (one mostly careful owner) before giving the keys to Evan Davis. And already he's wrapped it round more lamp posts and driven into more walls than can be possibly good for listening figures.

But back to the box. So we've established I don't do normal telly. But I do do Netflix. I know, who doesn't? This blog is full of nods and winks to dozens and dozens of binge watch classics.

And here's another one. After Life written by and starring Ricky Gervias. If you've not seen it, here's the trailer:


I absolutely loved it. On more than one occasion I found I had something in my eye. Gervais has, it seems, come of age. It had me enthralled from start to finish. The writing, the cast, the jokes (yes, despite its dark leanings it's got some great gags), the soundtrack and a proliferation of the word cunt. It's got everything. Including a stellar performance from Penelope Wilton, despite her never moving from a graveside bench throughout - less being definitely more.

Of course I won't give anything away here, only that you'll find Cat Stevens in there. Perfect. Please tell me you'll watch it.