I Look From the Wings at the Play You are Staging 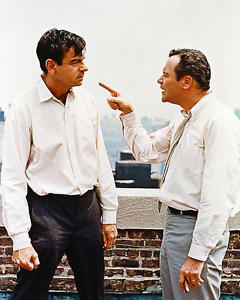 In 1968 when Walter Matthau paired up with Jack Lemmon in the film adaptation of Neil Simon's stage play The Odd Couple, he was reprising the role he'd played on Broadway in 1965. Matthau was Oscar Madison the upbeat but slovenly sports writer - sharing his apartment with Felix Unger, fellow divorcee, poker school friend, hygiene obsessive and, in today's speak, something of a snowflake. (In the play Felix was originally played by Art Carney.)

Matthau would later relinquish his role, giving way to Jack Klugman (later to star in Quincy), extending the play's run for another year. When the film of the play then transferred to television in 1970 Klugman kept the role of Oscar, with his comedy foil being played by Tony Randall. The show  was syndicated coast to coast and pulled in huge viewing figures. It was four times Emmy nominated, ran until 1975 spanning five seasons and 114 episodes.

Here's the opening credits with the perfectly pitched theme (it worked beautifully in the film, so why change it) by Neal Hefti - jazz heavyweight and composer extraordinaire.


It's not generally known, but a vocal version was also recorded at the time of the TV show. The lyrics - by Hefti - are a little on the lame side; which is probably why it doesn't come out to play very often.

Over the years the play has seen a number of revivals both here and in America, not least an all women cast; again, written by Neil Simon. Other productions include a West End run where Victor Spinetti played opposite Klugman, and in 2005 Bill Bailey & Alan Davies played it to packed houses at the Edinburgh Festival. Tantalisingly, in 1997, Robin Williams and Billy Crystal talked about taking a production on the road, but, it never saw the light of day. 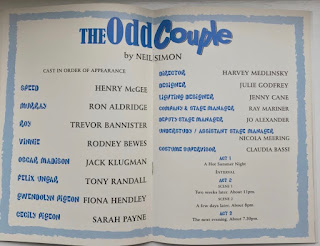 A revival that really did happen though was the one that came to London's Haymarket Theatre in 1996. A three month limited run saw Klugman and Randall return to their TV roles one last time, with a support cast that included a veritable Who's Who of British TV: Henry McGee (Benny Hill Show), Rodney Bewes (Likely Lads) and Trevor Bannister (Are You Being Served?) were all household names at the time. I also seem to recall Eric Sykes treading the boards for this one but he's not in the programme - maybe he stepped into an earlier production. 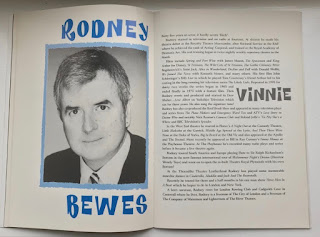 Before the cast take their final curtain call, I'd like to come back to the theme music. Martin Taylor is without doubt the world's greatest living jazz guitarist. What he can't do with six strings and a plank of wood isn't worth knowing. Back in 2000 Taylor included a rather chilled version of the theme on his Kiss and Tell album. I absolutely love it. See what you think...

Those who have served: