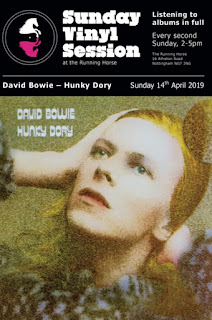 Of all the projects I've set up, and being associated with, in recent years, I think the one currently in the pipeline is the one I'm most excited about. Our new Sunday Vinyl Session we've got kicking off next month - listening to albums in full - is going to be a zinger. And we're starting with an absolute nailed on classic from 1971: David Bowie's Hunky Dory.

We're meeting at the Running Horse, one of the city's most celebrated music boozers. The format, such that it is, runs on rails - a bit of chit-chat at the beginning introducing the platter de jour and putting it in context, and then straight into Side 1. A comfort break, refills at the bar, a bit more chatter about the artist and then Side 2. Closely followed by more beer, and maybe a few associated singles/ B sides, and everyone chipping in with stories and or ideas for next time. And with it being a Sunday afternoon, it'll still be light by the time we're all wrapped up. What's not to like?

James and Janneke - for the beautiful artwork.

Simon - for help and support: he started all this malarkey in Glossop five years ago.

Matt - for the RTs - check out his club Off the Record in Birmingham.

And last, but not least, Rob. Landlord at The Runner. And fellow music nut.