Weezer. Weezer by name, Weezer by album title. Between 1994 and 2019 the Los Angeles band have, thus far, released thirteen studio albums - six of which are, quite simply, called Weezer.

That's right, half a dozen albums all with the same title. Their record company must love them.

But wait, help is at hand; providing you're not colour blind, that is. Their first, third, sixth, tenth, twelfth and thirteenth releases are colour coded. Here's a sample: 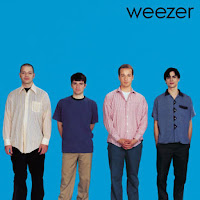 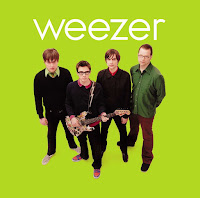 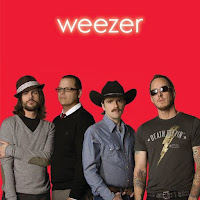 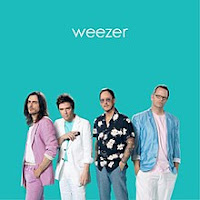 Not pictured are their Black and White albums, but I'm sure you get the picture. I latched onto the band quite late and remember buying the Red Album when it came out. Phill Jupitus and, I think, Tom Robinson were playing the hell out of them on 6 Music. I became very attached to Heart Songs. It's a song about, er, songs: songs and artists that influenced the band. What's not to like? I'm particularly fond of it, not least as it name-checks Grover Washington. Nice.

And so to Teal. Teal? That's turquoise to you and me. In 2018 the band recorded a cover version of Rosanna by Toto. Why? I'll tell you why. Some internet trend picked up by Twitter users and fans of Weezer (one in particular - see the story here) was pushing for them to cover Africa -Toto's monster hit and now a global/viral behemoth generating memes and everything. But the band resisted; instead covering Toto's least popular hit. As you do.

However, it did lead to them doing an album of covers. And, what do you think is on there? That's right - a joint venture with someone I'm sure a few of you out there will remember. Weird.


As a footnote to the story, and to prove Toto have a sense of humour too, when Weezer took Africa to #1 in the US Billboard Alternative Singles Chart, a couple of days later Toto released their version of Hash Pipe - a song Weezer released in 2001 from their Weezer album. Which, if you've been keeping up, is their Green Album. Till next time...
Posted by John Medd on Monday, March 04, 2019
Labels: Africa, Grover Washington, Teal, Toto, Weezer