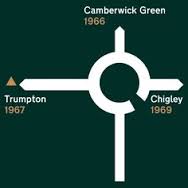 I once declared, a little rashly on reflection, that I wouldn't mind living in Chigley: with its biscuit factory, steam railway and regular cast of characters turning up in all the regular places. Hang on a minute, I already live somewhere like that.

I think what I like most is the reassuring six o'clock whistle which punctuates the end of the working day at the aforementioned biscuit factory. What happens next only appears strange if you don't reside in Trumptonshire. It heralds the start of the daily tea dance where the male workers in their best pressed overalls throw a few shapes with their buttoned up repressed women folk - all to the backing track of a barrel organ. Heady stuff. I'd like to think that when it wraps up they all slide down to the local hostelry for a few liveners. Maybe we'll have to wait for Chigley - The Director's Cut.


Anyway, without further ado, here is the six o'clock whistle.