Time was when any band worth their salt, gigging relentlessly up and down the highways and byways of this sceptered isle, would pitch up in crumbling ballrooms, sweaty rock clubs and falling down theatres: to boldly go where (probably) all the other hard working bands on the UK circuit had been the previous week. Or the week after. These clippings from a 1981 issue of Sounds showed just how far and wide your average transit van was expected to travel in order for it to count as a proper tour - and not just a casual jaunt. Imagine the countless books of Green Shield stamps you'd have racked up in gas stations navigating the nation's trunk roads.

As you can see, Girl, in April and May, pulled in a pretty impressive 31 gigs in 50 days. Upon closer inspection you'll see that it's a gazetteer of (mostly) bulldozed clubs and theatres in towns where live music probably doesn't exist anymore. Cleethorpes Winter Gardens anyone?

I saw them at least five times on that tour and I know that none of those venues exist today; car parks and apartments now I think. Perhaps one of them will have a Blue Plaque on the site recording the fact that good times used to be had there? I hope so. 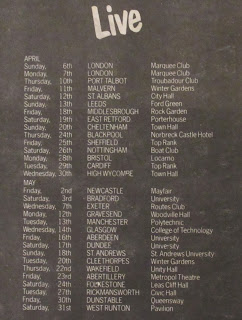