We stopped in a lovely little hotel on Sunday night in Leeds called The New Ellington. Tucked away in the legal quarter of the city and only a five minute walk from the station, it ticked all the boxes and much of the ground floor bar and dining area was adorned with classic black and white photographs of jazz greats. No prizes for guessing whose image took pride of place weighing in at, as it did, six feet square. Edward Kennedy 'Duke' Ellington is probably one of only a handful of musicians who, in the twentieth century, continually evolved, never stood still, and took their art form in ever far reaching new directions. 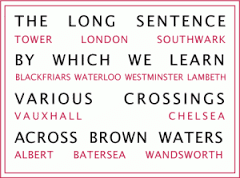 But even geniuses need sidemen. And Ellington had the very best; Ellington, it's probably fair to say, owed much of his early success to composer, arranger, lyricist and pianist Billy Strayhorn. He wrote Take The A Train and Lush Life and many other classics. He also penned Chelsea Bridge - around the time saxophone colossus (and one of my favourite players) Ben Webster was in Ellington's band. When Webster went solo he still dropped it in his set. Interestingly Strayhorn wrote the tune after seeing a Turner painting of Battersea bridge and misnamed it. Maybe if he'd known the mnemonic for remembering the order in which London bridges cross the Thames, he'd have nailed it.