He sat behind her on the bandstand every night. And every night he would watch her sashay in front of him in the exquisite little black party frock she always wore for gigs. Night after night he could tell if she was wearing big pants, little pants or no pants at all. He knew everything there was to know about her; not just the names of all the other big bands she'd ever sung with and how long she could hold a note for; he knew her embarrassing middle name that only her parents knew, her top five restaurants in New York and the fact that she was currently sleeping with two people. One was a girl.

On the flip side, she knew nothing about the slightly awkward, slightly geeky, slightly stoned sax player sitting within six feet of her who, when he wasn't belting out a solo, spent the entire evening secretly staring at her (nice) bottom. Why would she? She'd only been singing with the band for three weeks and in that time she only knew the name of Keith the drummer. But that was only because she called all drummers Keith. This one was actually called Dave. Since the band had taken up residency at The Coconut Lounge they spent an hour each afternoon rehearsing for that night's gig and as for the show itself, he sat behind her the entire time gazing at her bum.

On the Friday their grizzled band leader, Frankie Monroe, decided to drop Perdido into the band's set. It's a beguiling little jazz standard that really tests the range of any singer brave enough to tackle it: just as the final syllable of the final word of the final verse falls out of the singer's mouth, the alto sax kicks in and it's heads down see you back at the chorus - a military operation to be carried out in just under two minutes with a handover every bit as important as if you were in the 4 x 400 metre relay. The first time they tried it the whole band all fell about laughing. Only because the sax player missed his cue and, instead of blagging it, he shouted 'Fuck' at the top his voice and then asked if anyone wanted to buy a saxophone. Even the singer laughed. She turned around, walked up to him and told him not to sweat it and gave him a peck on the cheek. 'It'll be alright on the night' she said, grabbed her coat and left the building. 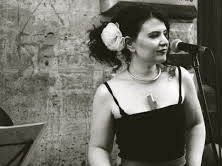 Later that evening they both arrived at the venue at precisely the same time. He held the door open for her. 'Are we still doing Perdido tonight?' he casually asked her, while at the same time praying she'd politely say no, let's do it another night. 'You bet' she said. 'Great!', he lied. They parted company in the foyer and went to their separate changing rooms. He bunked in with the rest of the band in a room not much bigger than a phone booth. She had a veritable palace in comparison. And all to herself. It even had film star bulbs around the mirror.

Thirty minutes later, show time. The band filed on stage and took up their positions - all matching jackets and music stands. The first number was Ellington's Take The 'A' Train. The band could play this one in their sleep. They then stepped it up a gear with a brace of tunes by Count Basie before band leader Monroe stepped up to the microphone and announced that 'the next one skips along at quite a pace. It's called Perdido.' The sax player was bricking it. The singer clicked her fingers and counted to three. They were off. 'I look for my heart it's perdido' - she was singing it to perfection; and then it was time for the solo. As she hit the all important note the sax player stood up and played his solo note bloody perfect - like he'd been playing the song all his life. Reaching the crescendo and then winding up with a quick ad lib flourish, the tune came to rest and the crowd went wild.

The singer bowed, waited for the crowd to stop applauding and then took the microphone off its stand and thanked the band. 'In particular' she said, 'I'd like to thank Billy on the alto sax. He's spent the last three weeks staring at my bum while I've been belting out these tunes.' Billy didn't know where to look. 'But tonight', she went on, 'he came good. Billy - are you taking me out for a drink after the gig? I think we need to get to know each other.' The crowd loved it. Billy couldn't stop smiling. His music teacher had been right all those years ago - it really is all about timing.
Posted by John Medd on Saturday, September 19, 2015
Labels: Perdido