Sing when you're winning 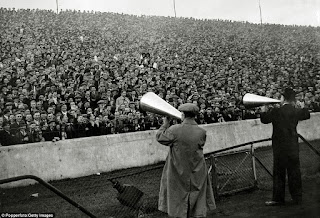 Football chants: they're a bit like radio jingles. Throwaway yet informative, simple yet to the point. And funny; aimed at players, mostly, but often directed at the fans sitting in the opposite end to you. A prime example of the former: remember when Peter Crouch (6'-7") played for Liverpool? He's big, he's red, his feet stick out the bed, it's Peter crouch, Peter Crouch. And the latter: when the away fans inform the home fans that they don't think much of their ground and sung to the tune of When the Saints - My garden shed is bigger than this, my garden shed is bigger than this.

And like any catchy song that eventually becomes an earworm, it's the alchemy combining a turn of phrase and a memorable tune. In fact, and I'm probably going out on a limb here, but you'll probably find that 90% of all the best chants rely on just a handful of tunes. Think of a chant you heard last Saturday afternoon and I'll lay money on it being hung around one of these songs:

There are, obviously, notable exceptions. When Rio Ferdinand famously failed a drugs test, Fulham fans came up with His name is Rio and he's watching from the stand to *that* tune by Duran Duran.

But my personal favourite has got to be one from the seventies (of course) and was a rather succinct tribute laid at the door of Billy Bremner (587 appearances/ 91 goals for Leeds Utd 1960-1976).