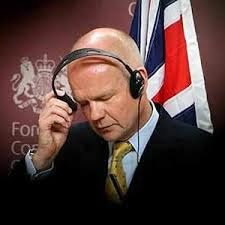 When it comes to impressions I'm about as good as Mike Yarwood. No matter who Yarwood did it was always a halfway house between Eddie Waring and Robin Day.

But I do derive a lot of pleasure from saying 'She's not me mam, she's my PA' in an out of breath stab at Johnny Vegas. That and shouting 'Tower of Power' in a generic Northern Irish accent. I tend to do both of these while parked up at traffic lights.

And I now have a third to complete my trilogy. Apropos of nothing I will just blurt out 'Shanghai' in a William Hague voice and spread it out over at least half a dozen syllables.

Childish, I know. But as John Lennon once said, whatever gets you through the night.
Posted by John Medd on Tuesday, March 04, 2014
Labels: John Lennon, Johnny Vegas, William Hague