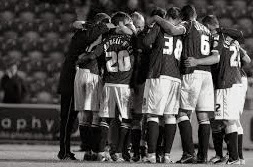 Fans of Notts County don't see a lot of good times. It's mainly thin, not much thick. If it wasn't for the self deprecating humour of the fans there would be a lot of jumpers throwing themselves off Trent Bridge right now.

I've never been a fan of the pre-match huddle; as the wag who sat a couple of seats from the Number One Son last Saturday said - 'You've had ALL week.' Precisely. And now the manager says he's baffled as to where it's all gone wrong this season. He's baffled? What does he do all week?

In addition to the legendary Wheelbarrow Song The Kop now sing 'The football league is upside down' to the tune of When the Saints. Priceless.

I think it's time to lose the group hug.