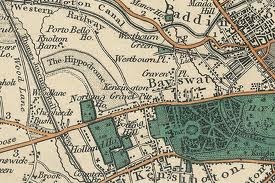 It was Saturday morning when I first noticed him. It was early, early for me anyway - about half past ten. I was just coming out of Hyde Park, opposite The Albert Hall, as he was running in.
‘How am you?’ And with that he sped past me into the park. How am you? Was he foreign? Was he a bit dim? I don't know, but he was wearing a tee shirt that made me laugh. Not out loud, just inwardly. Something I hadn’t done much of recently. Picked out in white on his black shirt was the slogan ‘What You Talkin’ Bout Willis?’
He was there again the following Monday. I was taking Blue for her morning constitution, just coming around the north side of the Serpentine, when I saw him about fifty yards away. Within seconds he was passing me on the right hand side, half on the path, half on the grass.
‘In it to win it lad.’ In it to win it? How am you? What was he trying to tell me? Again, his shirt brought a smile to my face. This one bore the strap line ‘Whatever Happened To The Likely Lads?’ What indeed? And was he Bob, or was he Terry?
Tuesday was the same, same time and tee shirt, but Wednesday was a no show.
‘Looks like he’s stood us up’ I said to the dog. Oh God, I’m talking to the dog.
Walking back to the flat I made sure Blue was back on the lead, crossed over the Bayswater Road and spent the next twenty minutes re-running old Likely Lads episodes in my head. My favourite was always the one where the pair were holed up in a Church trying desperately to avoid the England score before the TV highlights were shown later that night.
With the dog lead and a pint of milk in one hand I fished my keys out of pocket with the other and let myself back in the flat. I live alone. If you don’t count the dog and the two cats, that is. I’ve lived here five years. In fact it’ll be  five years to the day in a couple of weeks. I know this because I moved in on my 35th birthday.

Me and the dog stepped out of the pub, squinted in the daylight, only to be greeted by another all too often downpour. Tempting as it was to do an about turn and return to my still warm bar stool I decided that I really was hungry and, anyway, The Alfred hasn’t served food since 1982; if Bill ever offers you a pie, check the sell by date. We ran to the kebab shop on the corner, and I mean ran - after all, Blue is a greyhound. I put my order in for a ‘shish with everything’ and while it was being constructed I nipped to the newsagent next door for a paper.
I found him on page five. His name was Dave Goulden and, along with a group of other ‘Distant Dads', he’s been fighting for the right to have fair and unrestricted access to his children after he and his wife divorced eighteen months ago. Just as I was scanning further down the story a big dollop of chilli sauce ran off my kebab and totally obliterated half of page five.
Now I knew his name I wasn’t quite sure if having this piece of information helped me any; yeah, I’d be able to shout ‘Morning Dave’ as he charged past me in the park. But it wouldn’t bring Becca back.

OK, I guess it’s time to fill you in on this woman who walked out on me and whose face I still expect to see next to me every morning I wake up. And, if I haven’t had at least three cups of strong coffee before I leave the flat, I still think I see her in tube stations, sandwich bars and pubs all over town.
Rebecca Jane Harrison-Flowers is what it says on her passport. For some reason she was never comfortable taking on my surname when we married, hence the double barrel bit, and rarely uses it; at work or on utility bills she’s Rebecca Flowers. To friends she’s just Becca. To me she’s a gaping hole in my life that, as things stand, I don’t think I’ll ever get over.